After MONTHS of complaining to Animal Control about my neighbor's barking dogs, I finally resorted to capturing the barking on video and writing a blog post about the experience of being ignored by Animal Control Officer Gail Petras.  That post mentioned not; the neighborhood, the street, my name or the dog owner's name.  But it lead to the most viscous and vile things being left in the comments, following the blog.  These comments were made by the owners of the barking dogs (6 of them), Marcus Keilch, owner of Marcus Anthony Construction, and his wife, Bernice Rosa.

To make matters worse, about a week after this particular blog posted, in retaliation for it, Bernice Rosa filed an ex parte restraining order against me, alleging all sorts of false and disgusting things.  At the hearing, held on January 25th,  Officer Petras was subpoenaed to testify.  She lied on numerous occasions.  You can see her testimony in the transcripts, below, which I will analyze. 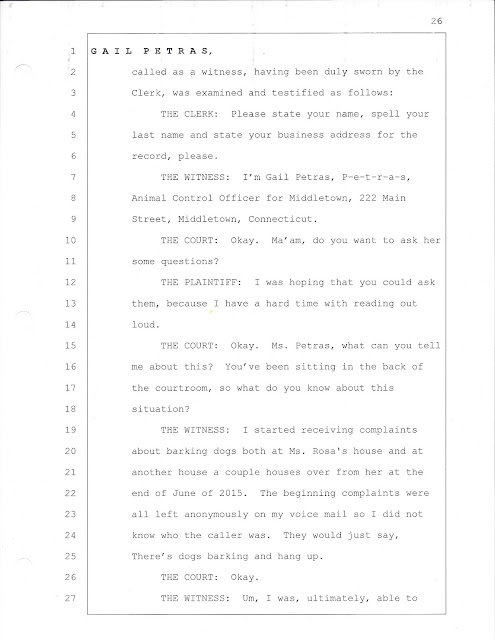 The plaintiff, Bernice Rosa, is expert at playing the sympathy card; "I have a hard time reading out loud" she pouted.  Obviously I had more to say more than that, otherwise, Petras wouldn't know what houses I was talking about. 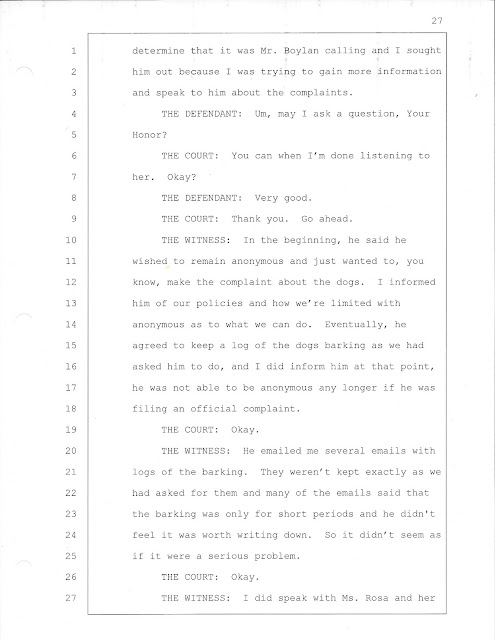 She did not seek me out; she was able to "determine" it was me calling because I saw her across the street one day and introduced myself as the complainant.  It was at this meeting that she asked me to keep a log, to which I readily agreed, not "eventually" as she claims.  They weren't exactly as "we" asked for?  Date, time and duration.  How complicated is that?  If she had bothered to read the logs, she would have seen that they barked off and on all day and sometimes barked for hours at a time.  Here are a couple of examples:

This is a supplemental to the email and phone call from earlier, today regarding the barking dogs at 03 E. Main.

Tell me; do you have any problem understanding that? 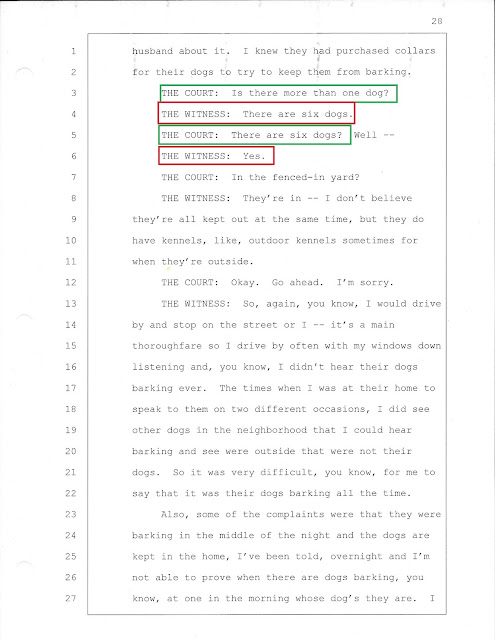 Six dogs!  So she drives by with the window down.  That takes about 30 seconds; dogs bark intermittently.  And she stops on the street where the occupants can see her and bring the dogs in.  For how long did she stop? I mean, really, she's too busy to return a phone call or send an email, but she has time to park in front of someone's house? 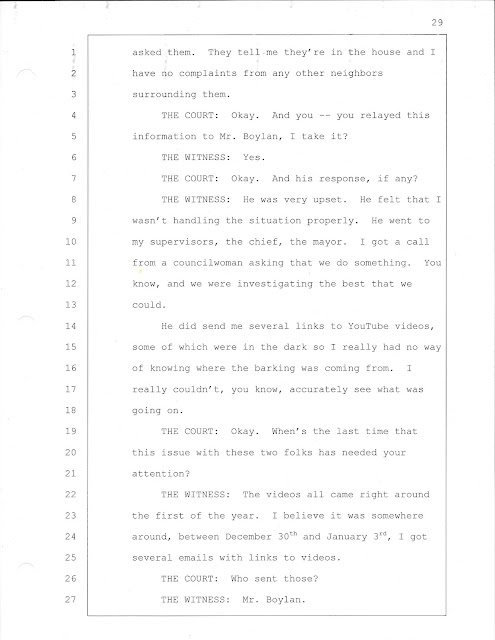 She did not relay ANY of that information to me.  From September to January, she never contacted me, once.  "We" were investigating.  Who is "we"? 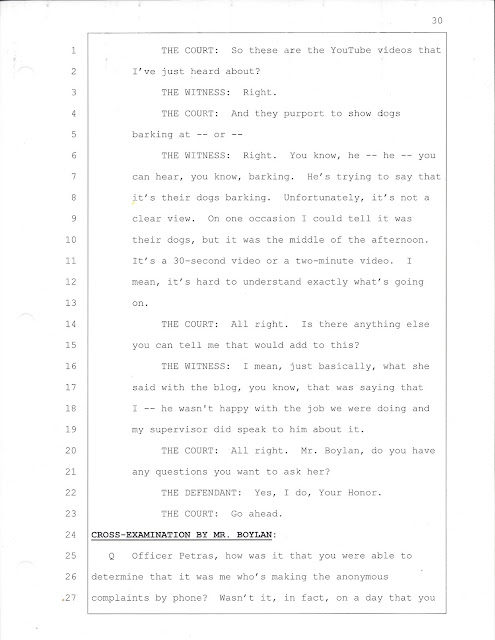 It isn't exactly hard to see what is going on.  You can see dogs running around chasing a motorcycle and you can hear them barking.  Her supervisor, Sgt. Mazzotta, tried to intimidate me into shutting up. 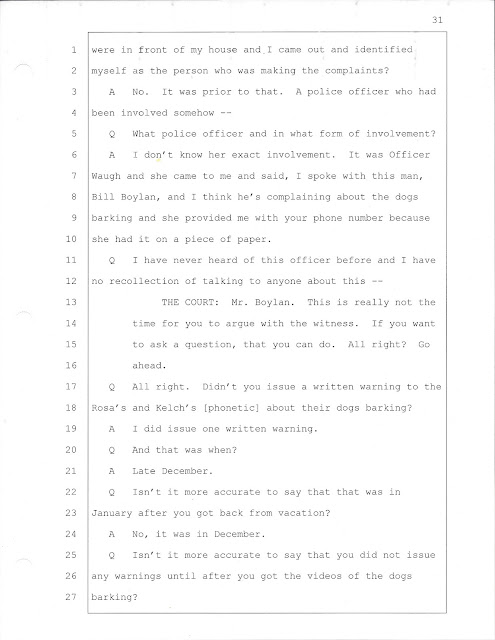 This is an utter fabrication.  I never met or spoke with Officer Waugh until September of this year when she came to my house to retrieve a stray dog that walked in my back door.  As it turns out, that stray dog belonged to Rosa/Keilch.  Small point, but it goes toward her truthfulness, or lack thereof, but she was on vacation in late December.  I got her out of office auto reply when I sent her the videos. 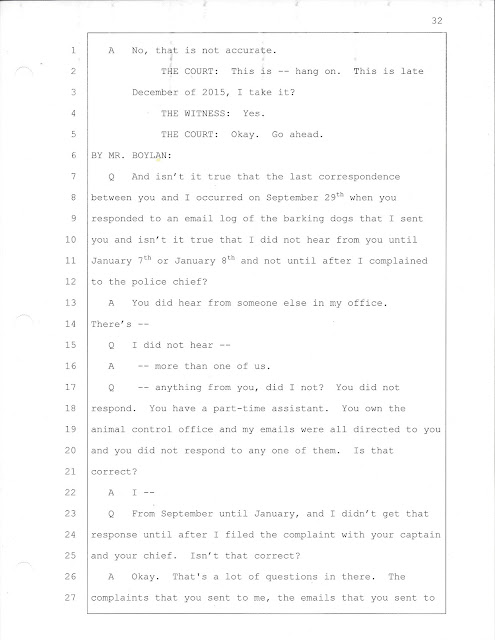 The only other person I talked to about this was her assistant, Dawn.  All she told me was that Gail was "working on it".  The only communication I had with Petras was in September and this is what she had to say:
Hi Bill,
I received your log.  I am going to check in with them for a follow up visit.
I will keep you posted.
Gail

ACO Gail Petras
Middletown Animal Control
860-638-4030
As you can see, there is no mention of a problem with the format of my log.  This is the only communication I got from her until January of the following year. 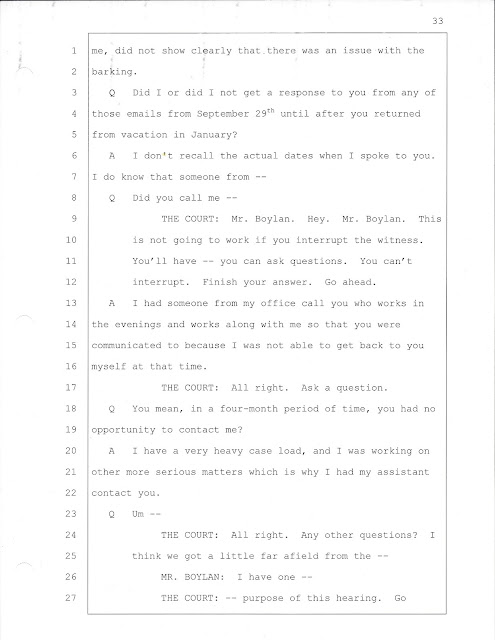 Twice, three times at most, in a four month period the assistant spoke with me.  How convenient; she can't recall the dates she spoke to me; she must be a student of Hillary Clinton.  She says she has a "heavy case load" and didn't have time to contact me over a four month period, but she has time to park on the street in front of the house? 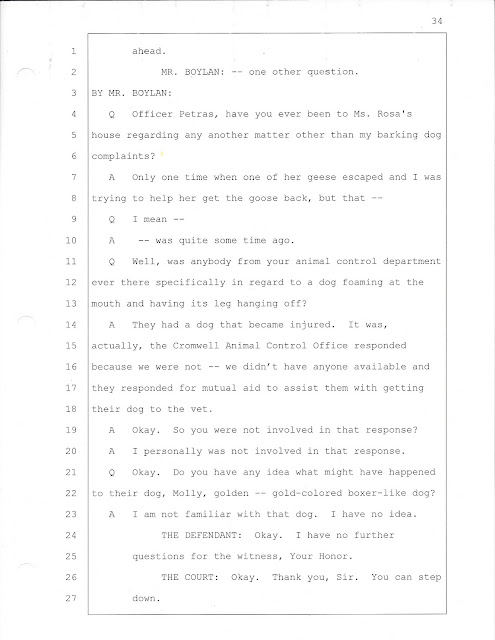 How does a dog "become" injured?  In this case, the dog was allowed to roam by its irresponsible owners and was hit by a car. 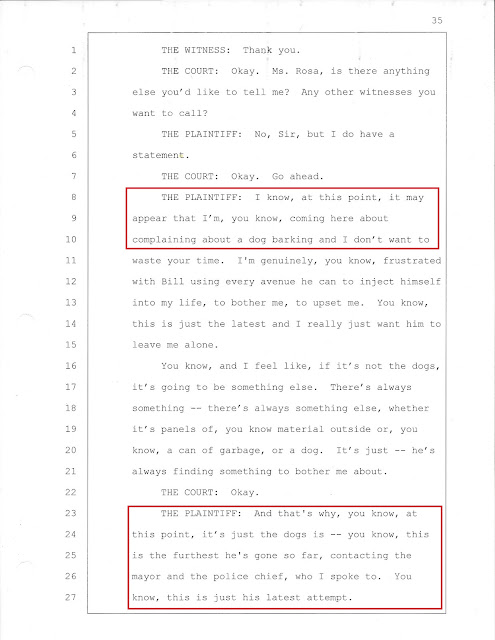 So, Bernice lets the cat out of the bag, (or in this case the dog); it really is about my complaints to Animal Control!  I don't believe for a second that she talked with either Drew or McKenna.  I contacted them about Animal Control and never mentioned her name!  If she knew I contacted them, it is because Petras told her.  Stay tuned for part 3.
By Middletown Insider - October 15, 2016