And Justice for All: Post Election Recap by John Milardo 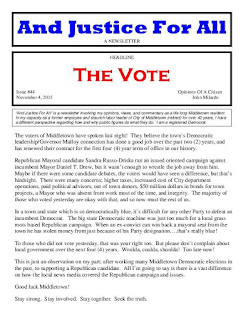 The voters of Middletown have spoken last night!  They believe the town’s Democratic leadership/Governor Malloy connection has done a good job over the past two (2) years, and has renewed their contract for the first four (4) year term of office in our history.

Republican Mayoral candidate Sandra Russo-Driska ran an issued oriented campaign against incumbent Mayor Daniel T. Drew, but it wasn’t enough to wrestle the job away from him.  Maybe if there were some candidate debates, the voters would have seen a difference, but that’s hindsight.

There were many concerns; higher taxes, increased cost of City department operations, paid political advisors, out of town donors, $50 million dollars in bonds for town projects, a Mayor who was absent from work most of the time, and integrity.  The majority of those who voted yesterday are okay with that, and so now must the rest of us.

In a town and state which is so democratically blue, it’s difficult for any other Party to defeat an incumbent Democrat.   The big state Democratic machine was just too much for a local grass roots based Republican campaign.  When an ex-convict can win back a mayoral seat from the town he has stolen money from just because of his Party designation….that’s really blue!

To those who did not vote yesterday, that was your right too.  But please don’t complain about local government over the next four (4) years.  Woulda, coulda, shoulda!  Too late now!

This is just an observation on my part; after working many Middletown Democratic elections in the past, to supporting a Republican candidate.  All I’m going to say is there is a vast difference on how the local news media covered the Republican campaign and issues.