Press Release from the Office of (D)State Representative Matthew Lesser

Hartford- As many the folks out there may know, I recently joined the black and Hispanic caucus up at the state’s capital.

As ctlatino.news.com said: “When Lesser asked to join the Black & Latino caucus, there was some quiet head scratching in some corners of the State Capitol.  As it turns out, Lesser’s mother came from Argentina.”

Well, I have to admit there were some folks out there scratched more than their heads when I announced my intention to apply and join the Black & Latino Caucus despite two terms of not being apart of it; I mean take a good look at me. My Edward E. Newman smile, and sandy hair- it all makes sense, I am definitely a Hispanic. This being politics, I realized that I would have to prove my heritage and I am asking the Middletown Insider to publish a photo of my puffy and smiley Argentinian face in a band I founded in the 1970s: Menudo.  It’s true folks, check Wikipedia, or ask the same people that claimed my buddy Daniel T. Drew took down a corrupt sheriff. 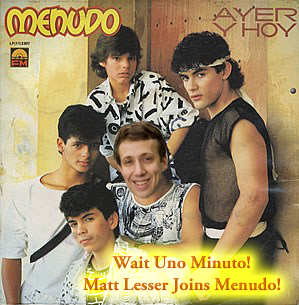 I clearly remember when my opponent in last year’s election bragged about her dancing roots in various articles. I felt at that time I should have come out of the closet about my dancing past as a Spanish heartthrob, hell, I taught Ricky Martin how shake his boooo-tay.  Please check the internet for proof of my Hispanic heritage, Between the years 1988-2011 I worked on several of the following albums with the boyz: Sons of Rock; Sombras Y Figura; Los Ultimos Heroes; Vote for me, I’m Spanish, Tiempo De Amar and Driving to Obama with Danny. If that doesn’t work, then check out the photo below.

Matthew Lesser
“When in doubt Re-district after Midnight”
By Middletown Insider - June 21, 2015