CCDL Responds to Malloy/Blumenthal press briefing on guns in schools 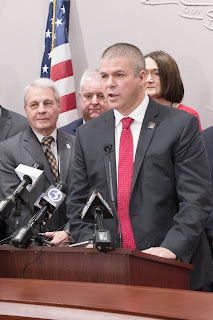 CCDL President Scott Wilson:
Governor Malloy stated that “our schools should remain safe”.   They are not safe now.  Any killer can find his or her way into any school and murder an entire classroom with impunity.
Simply put, gun free zones have been a continual target for people that wish to kill as many as possible, with no resistance until many innocent lives are lost.  A reminder; the FBI failed to follow protocol in Florida, the police failed to adequately investigate the shooter numerous times, and the officers outside the school failed to enter while the murders were occurring.  Teachers and children were slaughtered with no means of protection, whatsoever.
We are all for making it harder for killers to get in to schools, but Governor Malloy and his cronies dig their heels in over their fantasies of gun free zones.  The result of these failed policies rests squarely on the Governor’s head.
Teachers and administrators are likely to be the first line of defense. We should provide them with as many tools as possible, to protect our children.  That includes firearms and the training to use them, if they wish.  Remember – when seconds count, the police are minutes away.
By Middletown Insider - March 15, 2018