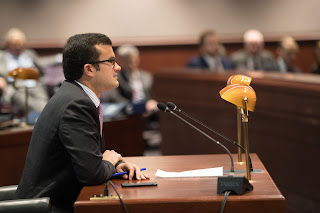 “Just last week the legislature voted – for a second time – to restore funding to the Medicare Saving Plan. That vote to override the Governor’s veto helps more than 100,000 low-income seniors and disabled residents pay for insurance premiums and co-pays not covered by Medicare,” Sen. Linares said. “The ink on that vote is barely dry when the Governor announces his plan to again strip that funding in the new budget year. Why is he so intent on making these vulnerable residents choose between buying groceries and their health?”

Sen. Linares said the Governor’s proposals would place another financial burden on this population by imposing the sales tax on non-prescription drugs. Additionally, the bid to increase the gas tax and install tolls throughout the state would place a burden on the organizations that provide services for seniors and the disabled.

“I recently received an email from a nonprofit organization that travels daily to group homes throughout the state,” he said. “Tolls would be another expense that would divert money away from the care and services they provide.”

Sen. Linares said that during the last legislative session, the General Assembly began the process of controlling spending and streamlining state government. The Governor’s plan would move the state away from efforts to improve the state’s fiscal outlook and create a more business-friendly environment.

Among the Governor’s proposals are:
•       Rejecting the new Education Cost Sharing formula that provides aid to schools based on need, population, poverty and other factors

“The tax and spend policies of the past have made Connecticut the last state in New England to recover from the recession,” Sen. Linares said. “We need new policies that will move our state forward, attract and grow businesses, and grow jobs. More taxes will only choke those efforts.”