And Justice for All - Dan Drew Must Go! 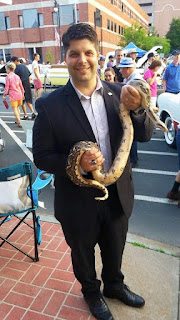 And Justice For All


And Justice for All is a newsletter involving my opinions, views, and commentary as a lifelong Middletown resident. As my capacity as a former employee and staunch Labor Leader of City of Middletown Unions (retired with 42 years of service), I have a different perspective of how and why public figures do what they do.

The saga of Middletown Mayor Dan Drew continues, and it’s not very flattering. It has taken
until this year for many “outsiders” to finally understand what the “insiders” have been saying
all along about this Mayor. He is cunning, ruthless, arrogant, and believes he is above the law.
The first time I had any interaction with Dan Drew was right after he announced that he was
opposing then Mayor Sebastian Giuliano’s re-election. Drew was a nobody in Middletown
politics and had recently moved to town. The disaster at the Kleen Energy power plant had just
happened, and local Labor Organizations were planning fundraisers for the families of those
killed during the explosion at the plant.

Mr. Drew attended the first couple of meetings we held with the various organizations, citizens,
and businesses. He needed exposure and was going to use a terrible event to do so. As I was
one of the fundraiser organizers, I announced during a meeting that no one was going to use
this venue as a platform to further their political careers. We never saw him again! That’s the
Dan Drew I know. A politically motivated opportunist!

Mayor Drew seeks out Organized Labor support and usually gets it (no surprise in
Connecticut), but treats the managers union for the City of Middletown with disdain. He has
reduced their membership via intimidation during negotiations. Yet he will give those
managers who are considered exempt employees (excluded from belonging to a Union) better
wages and benefits. For that, he demands loyalty and conformance to his truths!
As Mayor, Drew has terminated minority employees who were protected under the American
Disability Act (ADA) and Commission on Human Rights and Opportunities (CHRO). One
such termination cost the City of Middletown more than a seven figure monetary award. Drew
has made sure he hid that from the public. Yet, two of the supervisors who cost the City the
seven figure award went unscathed because they were “his” boys!

Under Mayor Dan Drew’s leadership, Middletown reorganized and consolidated several City
departments. He claimed it would save taxpayers’ millions of dollars and improve services to
the Middletown citizens. Instead, it has cost the taxpayers much more money than if he had
kept individual departments. The consolidation did nothing to improve services. A failure!
Mayor Drew states over and over how he lowered taxes in Middletown. Total lie! Our taxes
have gone up every year! As a matter of fact, since Dan Drew was elected Mayor,
Middletown’s bonded debt (borrowing money), has been at an all time high. Currently we owe
over $120,000,000. That’s without the cost of a new Junior High School.


Meanwhile Mayor Dan decides he wants to further his education and enrolls at Columbia
University in New York. He earns his degree while staying in New York to attend classes. The
course took months to complete, but he still received his weekly pay at the cost of Middletown
taxpayers. He doesn’t inform the Common Council or the public of his absence. He does this
under a cloak of secrecy.

Last year, Mayor Drew was paid to teach at Wesleyan University, while he should have been
performing mayoral duties for Middletown taxpayers. A sure way to garner Wesleyan support
and votes. No surprise that he screwed over a longtime Middletown Recreation department
supervisor so he could hire a Wesleyan employee as the new Recreation Director. He also hired
another Wesleyan University person as the new IT Director for Middletown.

This year, Dan appointed Joe Samolis, his political Administrative Aide as the new Director of
Planning, Zoning and Conservation. Drew violated all Civil Service testing state statutes and
the City’s Personnel Rules regarding hiring and testing procedures. Samolis does not meet the
minimum qualifications for the job. Many citizens objected to the appointment during the
Common Council meeting, but he is appointed anyway. Drew doesn’t care about rules, laws, or
the public! He wants what he wants! He governs City employees in the same manner. He
likes to intimidate, harass those he wants to quit, and violate policies and procedures.
During Drew’s last mayoral campaign, he attended fundraising meetings with his then paid
political consultant, Geoff Luxenburg, during normal work hours when he should be in his
office overseeing City departments and working for taxpayers. This fact substantiated by his
calendar which was obtained through the Freedom of Information Act.

Drew unilaterally withdraws Middletown from the Connecticut Conference of Municipalities
(CCM). An organization to which an overwhelming number of municipalities belong to.
Common Council members object and overrule him, as he overstepped his authority.
Middletown is still a CCM member.

As Mayor, Drew claims the Middletown is a “sanctuary city”. He doesn’t have the authority to
do so, and Common Council members inform the public that he can claim to anything he wants
to, but it doesn’t mean anything. Drew will use anything for exposure and publicity - politics,
children, labor organizations, and personal matters. All one has to do is look at his political
Facebook pages. Nothing is off limits for him to be in the lime light.

I must confess, a couple of years ago I ran as the Middletown employees representative for our
Retirement Board. I requested the names through the Freedom Of Information Act (FOIA), and
received the addresses from the City to send communications out to all employees and retirees
of the pension system. I did not know until receiving a call from a Hartford Courant reporter
last week that it was illegal for the City to give out Police and Fire department employee
addresses. When this happened in 2015 the City Attorney’s Office received complaints from
the Police Department informing them of the error. Accordingly, the City Attorney’s Office
informed City departments this cannot happen again.

Recently, Mayor Drew sent out letters for his gubernatorial run to all City of Middletown
employees requesting donations of $100. One problem with that was Police and Fire
department employee’s addresses were given to him. The other problem is that it is illegal to
request money from subordinates working under your leadership for a myriad of reasons - one
being it’s unethical. It’s an abuse of power. It’s viewed as intimidation. It’s illegal.
(Middletown Press http://www.middletownpress.com/news/article/Middletown-mayor-Campaign-appeal-to-city-12215983.php)

Drew sent out an apology letter stating it was “an error in judgment”. He states at one point
that “I” requested the information from the Human Resources Department. Somewhere else he
states “we” asked for the information. Which is it? He requested the info, or someone else
did? I’ll bet anything he did not request the information via FOIA. I’ll also bet he/they
received the information from the HR department secretary. Why wouldn’t he go through the
City Attorney’s Office like everyone else has to do when requesting information such as this?
That would be the legal way to do it. Drew then claims he did not receive or know about the
corrective action the City Attorney’s Office took on this same issue a couple of years ago. I
don’t believe that for one minute! I would think at the very least, he would have heard about it
during his Directors Meetings? Unless he wasn’t present because he was at Columbia
University doing homework! The City Charter states: “The Mayor shall be the chief executive
officer of the City and shall devote full time to the duties of the office. Full time shall mean
primary occupation.” We don’t have a full-time Mayor!

Now the State Elections Enforcement Commission is looking into this matter. Drew is
attempting to convince them that he is exempt from the law which prevents him from asking
for donations from employees, because he is not an employee of Middletown. He states he is
an elected official and exempt from the law. If he is not an employee, then why is he included
in the employee’s pension plan? He has the authority to hire, fire, and discipline. That would
make him the City employees’ boss. Keep on talking Dan! (Middletown Code of Ethics
https://ecode360.com/8363354 )

Yearly, the City of Middletown website places a listing of all those delinquent on their taxes.
This year, the listing was on the website for a few hours before Danny Boy had a tantrum and
had it removed from the site. Why? Allegedly his name was on it and my sources are credible.
I hope he’s paid his taxes by now? Not a good look for a Mayor or a gubernatorial candidate.
Geoff Luxenburg, who was Drew’s paid political consultant for his mayoral runs, was hired this
past August as the Mayor’s Administrative Aide due to the vacancy from the Joe Samolis
appointment. Luxenburg stated in a newspaper article he would be working solely for the
taxpayers of Middletown. He stated he would not be doing any type of campaign work for
Drew as he is out of that business now. Luxenburg abruptly resigned on October 18th, and gave
no reason for his departure. This has to make me wonder if Geoff requested the names of City
employees, or he’s just taking the hit for Drew on this mess! Danny isn’t going to withdraw
from the gubernatorial race…..not just yet. Not even after the editorial piece in the Hartford
Courant asked him to do so.
(Hartford Courant, http://www.middletownpress.com/news/article/Middletown-mayor-Campaign-appeal-to-city-12215983.php )

Dan’s goal from the very beginning in Middletown, was to get to Washington D.C. and get
some of that political money going around down there. All I can say is Dan Drew isn’t fit to be
Mayor of Middletown, let alone the Governor of Connecticut or in Washington!
In Brotherhood and Sisterhood. Stay strong, stay involved, seek the truth!

Disclaimer: The views and opinions expressed in this newsletter reflect the opinion and view of the author, and should not be construed as fact of advice. The author is a life long Middletown resident and taxpayer, and is sharing his opinion as such. The opinion and commentary do not reflect of any political party, organization, or citizen group. This newsletter reflects commentary and opinions which the author wishes to share with his friends.
By Middletown Insider - October 23, 2017