Last evening about 6:30, there was a knock at my door.  Instinctively, I knew it was the police.  They were expected.

I went to the door and greeted Officer Puorro.  No, he didn't beat on the door and shout; "Police! Open the Door!"; that is just an eye catching title.  (It worked, didn't it? :) )

In his hand, I could see a copy of an email I had sent the previous evening to Marcus Keilch and his wife, Bernice Rosa.  He was interested in the history between me and the neighbors from Hell.  (TNFH)  After about 30 seconds, I invited him to come in; his demeanor was such that I felt able to open up to him.

Officer Puorro and I spent over half an hour discussing the history.  At the end of this article, you will find links to previous posts that will make our history quite clear.  Be sure to keep an eye out; there is more coming.*

Here is the email in question:

You have only yourselves to blame for this, with your viscous comments against me and your phony restraining order.  Although I suppose Petras can bear the burden too, since she is the one who brought that blog post to your attention.

I have the entire transcript of the hearing.  I've broken it down into manageable segments, along with every document that I submitted to the court as evidence.

Each segment is scheduled to post automatically at random intervals to the Middletown Insider, so even if something happens to me, they will go public,  You are going to suffer the anticipation of each and every one and there is nothing you can do about it because it is all a matter of public record.

The reign of terror you have wrought against me and so many others is coming to an end.  You picked the wrong man to mess with.  Your name will be destroyed.

Oh, and there are one or two other things about which I have Insider information about.  You may want to start making arrangements for someone to care for the kids while you are in prison.

It seems that earlier that day, Rosa and Keilch had gone to the police department and lodged a complaint against me in regard to that email.  They wanted me arrested.  They claimed that email was out of the blue, that there was no provocation on their part and they had not communicate to me in the recent past.  True to form, that was a lie.  Here is a copy of one comment, the least vile of then, that Rosa submitted just 12 days prior (it was not allowed to post.  Because of the flood of such comments, comments have for the time being, been disabled.)
_____________________________________________________________________
Bernice Rosa has left a new comment on your post "Unconstitutional Law Took Effect in Connecticut Oc...":

I'm so flattered that youre always talking about me. Really I am.
I didnt lie about you and the onlt thing that you say i lied about is if my house belongs to my hus

Moderate comments for this blog.

A couple of months ago, I spoke to my attorney about filing a civil suit against Rosa making a false statement against me, which lead to a temporary ex parte restraining order, which was denied by the court on January 26th.  He advised me that a home owner's policy would not cover something like this because it was deliberate and criminal in nature and; although I would likely get a judgement in my favor, it would by unlikely that I could ever collect on it.

He went on to suggest that I use this forum, The Middletown Insider, and my First Amendment rights concerning freedom of the press to set the record straight.  That is what I intend to do.
After fully explaining the history and circumstance of the situation, Officer Puorro was of the opinion that this was indeed, on the face of it, a matter of Freedom of the Press.  We ended our conversation and I walked out to the curb with him.  It was now dark and I wanted to retrieve my Trump signs so they wouldn't be vandalized.  I could see TNFH watching from their yard with bated breath, in hope of seeing me brought out in hand cuffs.  They were disappointed. 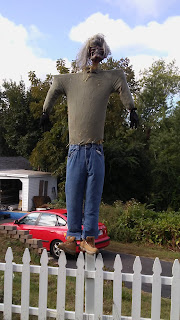 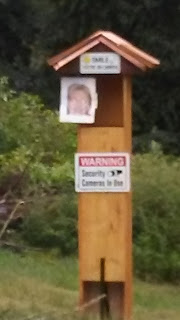 More than one person has advised me to lay off; all of them female.  They fear for my safety.  To a point, so do I.  On or about Sept. 30th, I had a security system installed.  Evidently, the installation was seen by TNFH.  By the end of the day, Keilch and a friend had erected the structure seen in the photo.   It is situated such as to be directly facing my house, diagonal to the street.  Not long after, a day or two at most, they erected a scare crow near this structure.  It is, in my opinion, it is a slight intended to represent me; tall and skinny with long hair, also looking at my house.

While I do have my concerns, enough to have a security system installed, this matter has become so public, that if something were indeed to happen to me or my property, TNFH would be the primary suspects.

Note:  This is not just about me.  Rosa's false application for a restraining order spurred me to research both her and her husband.  That investigation revealed a history of harassment against other people.  It seems they feel they can engage in this sort of behavior with impunity.  Not any more.  Perhaps they will now think twice before they try to destroy another person's life.  "All that is necessary for evil to prosper, is that good men do nothing."  The days of good men doing nothing are over.

*Regarding the posts that are coming; an introvert by nature, the first of them were some of the most difficult and pain things I have ever had to write.  It was necessary to reveal things that are of a deeply personal nature, which goes completely against the grain.

Now, let us raise our glasses against evil forces!
By Middletown Insider - October 19, 2016