Are Chickens an Endangered Species in Middletown?

UPDATE:  This story has a happy ending!  Dan and Brenda moved the pen and are now in compliance with local health regulations!

The only neighbor that would be affected by moving the coop (or leaving it in place), would be me.  Following is my letter in support of my neighbors.

I hope others will show their support, too.  Letters on their behalf can be sent  to joseph.havlicek@MiddletownCT.gov.

To Whom It May Concern:

I’m writing this letter on behalf of my neighbors, Brenda and Danny Smith, who live at 123 Main St..  (Not their real names or address.)

It is my understanding that they recently received a notice from the city Health Department concerning a chicken coop and pen that may be located in violation of city health regulations.

While I understand the good intentions of health and zoning regulations, they are often crafted by well-meaning people who have little or no practical experience in dealing with, or living with, certain things, such as farm animals, and tend to paint everything with the same broad brush; one size fits all.

The coop (and pen) in question boarders our mutual property line and is essentially just below my bedroom window.
It is a well-constructed and attractive building, which I helped build more than year ago.  The pen is secure and kept meticulously clean.  The chickens are well cared for, their wings regularly clipped to keep them from “flying the coop”. 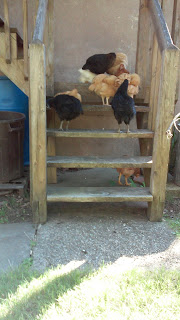 I grew up in a rural community and spent a great deal of time on active farms, working and playing, where livestock of all sorts was present.  It is not uncommon for livestock to be kept in barns, pens and fields in the immediate proximity of a farmer’s house, in far greater quantities than in the instant matter.

As such, I got to see first hand how our food, both meat and produce, was raised and brought to market.  The Smith's, with their chicken coop and vegetable garden, are teaching their children to appreciate where food comes from.  The children are active participants in the care and upkeep of the chickens and coop.  They are learning valuable lessons in responsibility, as well as respect for those whose labors feed us.

Having chickens next door to me is actually quite pleasant and entertaining.  If one can call chickens “friends”, these birds have become my friends.  I’ve been greeting them all this time with, “Good morning, ladies!”  When they see me, the run to the fence, expecting a treat, which I often times provide them.  Yesterday, during the heat of the day, I took a treat out to them (some stale pastry).  Only five of the birds were out; the others were keeping cool in the coop.  As soon as I called out to the ones in the coop, they came running to join their sisters in picking crumbs from my hand!

To force the Smith family to move their coop would serve no public interest.  As the only neighbor affected by the chickens, I can assure you there is no heath concern.

On the other hand, to force them to move the chickens merely to satisfy a Paper Mache requirement would cause the Smith family an undue hardship.  The coop is constructed such that moving it would require a massive and expensive undertaking.  As it is, there is little chance that the chickens will ever produce enough eggs (in which I from time to time share) to pay for the cost of building the coop, much less provide a return on their investment, other than the valuable lessons taught the children, as mentioned above.

I fear that enforcing the regulation verbatim without consideration of extenuating circumstances, the practical reality that there really is no health concern or benefit to the community, or of the burden it would cause; could force Brenda and Danny to get rid of the chickens.

There is absolutely no compelling reason to do that.  Doing so, would cause the Smith family a great hardship, with no benefit whatsoever to the community at large, or to me, the next-door neighbor.

Therefore, I urge the responsible parties to grant the Smiths a waiver or an exception, or write an ordinance specifically allowing the coop and pen to remain where they are; or to take some other measure that allow the chickens to stay.