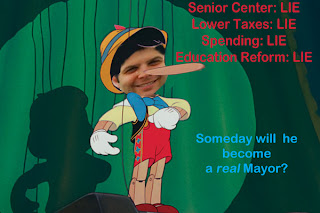 Earlier in the week, Mayor Drew made Deputy Personnel Director "Acting" Personnel Director. Why is this relevant? The whole idea behind Mayor Drew and his super duper special Task Force on Government Efficiency was to eliminate the Personnel Department and consolidate it into the City Attorney's office to "save tax payers money." Or so was Mayor Drew's cover story for offering  golden handshakes and pay-outs to a few departmental director's he wished to give the boot to make way for more politically advantageous individuals of his and the Democrats' choosing. The issue? This document called the Middletown Charter.
According to the Charter, (and why the Mayor is only NOW reading this is another cause for concern), the Personnel Director must preside over the Personnel Review Committee. Now that Mayor Drew wants to get Officer Michael Timbro sworn in as Deputy Police Chief as fast as possible, this process becomes is cause concern. The third City Attorney position is rumored to be promised to Attorney and former Democratic Councilwoman Phrances Szewczyk.
According to sources,the position, which has not been posted as of yet, is being left unfilled until April when Szewczyk's prior commitments end and it is convenient for her to step into the job. The Government ReOrg report aka "Blue Ribbon Report" has the third City Attorney taking on the role of the Personnel Director's duties. How this will work when it does not adhere to Charter rules has yet to be determined and is a quesiton for new City Attorney Brigham Smith. Sources claim that Smith has close ties to Fairfield county and  Govenor Malloy; if true this  could explain how an Attorney from Michigan found such a position. A more reasonable explanation than the attorney was visiting family in Farmington and fell in love with Main Street. Whatever. The Insider welcomes Smith to our humble abode and wish him well.
If the Personnel Dept. is not to be eliminated the the Democratic Majority and Mayor are leading the public to believe is the whole purpose behind the reorganization, where is the cost savings that justified the  retirement packages ?