This series of articles began as a reply to a Face Book post.  It didn't take long for that to evolve into a series and the series has since morphed into more than anticipated.  Future installments will deal cover such things as business, education, the fair grounds and our most valuable resource - the people of Washington Court House.


Just below the state capitol building in downtown Hartford, Connecticut is the Bushnell Park amphitheater.  In late July of each year, the weekend long Greater Hartford Festival of Jazz is held, there.  The Monday night jazz series is also held there through July and August.  Tens of thousands come from all over the country to enjoy the music, food and people.  The event, ongoing since 1992, is free and open to the public.

There is ample space to build an amphitheater, here.  Why not do it?  Upscale and trendy, it would be an asset to the community.

East Haddam, Connecticut is a small town similar in size to New Holland.  It is home to the Goodspeed Opera House.  The Goodspeed hosts 3 musical productions, per year at its main venue, and many other productions at their smaller

venues.  It was established along the banks of the Connecticut River in 1963 in an old building in need of restoration.  Since 1963, the Goodspeed home to hundreds of world class performances, some world premiers.  They include Brigadoon, Abyssinia, 42nd Street, Man of La Mancha, Red Hot and Blue, Call me Madam, 1776, and City of Angels.

A building the size of The Goodspeed, which seats approx. 350, isn't necessary for a successful theater venture.  New Britain, Connecticut, a blue collar community, is home to the much smaller, Hole in the Wall Theater.  The seating capacity, there, is less than 125. 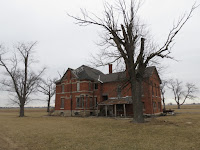 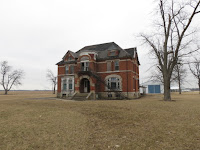 There is more to a theater than a stage, some seats and a concession stand.  Space is needed to build sets, store props, make costumes.  It takes craftsmen, seamstresses, stage hands and an orchestra.  Actors require housing.  And, they spend money, locally.

The old Children's Home, pictured above, would make a terrific venue for a theater, provided it retains enough structural integrity to be restored.

Cromwell, Connecticut is home to the Greater Hartford Open golf tournament.  It is now known as the Traveler's Championship, after its chief corporate sponsor, and is held at the Tournament Players Club at River Highlands.  It began 66 years ago.  Sammy Davis, Jr. headlined the event from 1973 through 1988.  Its purpose is to benefit charities around the country, including Paul Newman's Hole in the Wall Camp for children.

In 2017, the week long event attracted 290,000 fans and donated $1.72 million to charity.  It is second in attendance, only to the Phoenix Open.  The economic impact on the state was $68.2 million, mostly concentrated in the greater Hartford area.  Some of the world's most well known golfers have played, there.  They include Lee Travino, Bill Casper Arnold Palmer, Paul Azinger, Bubba Watson and Phil Mickelson.

Then, there is Buckeye Hills Country Club, near Greenfield.  It offers an 18 hole, championship golf course in a picturesque environment.  (I played there when I was a kid.)  With the right organization and sponsorship, it might very well attract hundreds of thousands of visitors and star golfers.  The economic impact to the area could be significant.

Has any thought been given to a polo field?

Last but not least in the realm of entertainment: rebuild the pool.  Diving boards and all.  Make it bigger.  Better.  Yes, people can get a membership at the "Y" and swim there.  But it ain't the same as swimming in an outdoor pool.  It encourages physical activity, (something today's youth seem to be lacking), and competition organized by the kids, themselves.  (Remember playing 4-square at the pool; do kids still play, that; or racing each other to the other side of the pool?)

Ridding ourselves of the city pool was a big mistake.  At one time, the sound of children laughing and playing at there could be heard for many blocks, around.  That happy sound is today . . . absent.