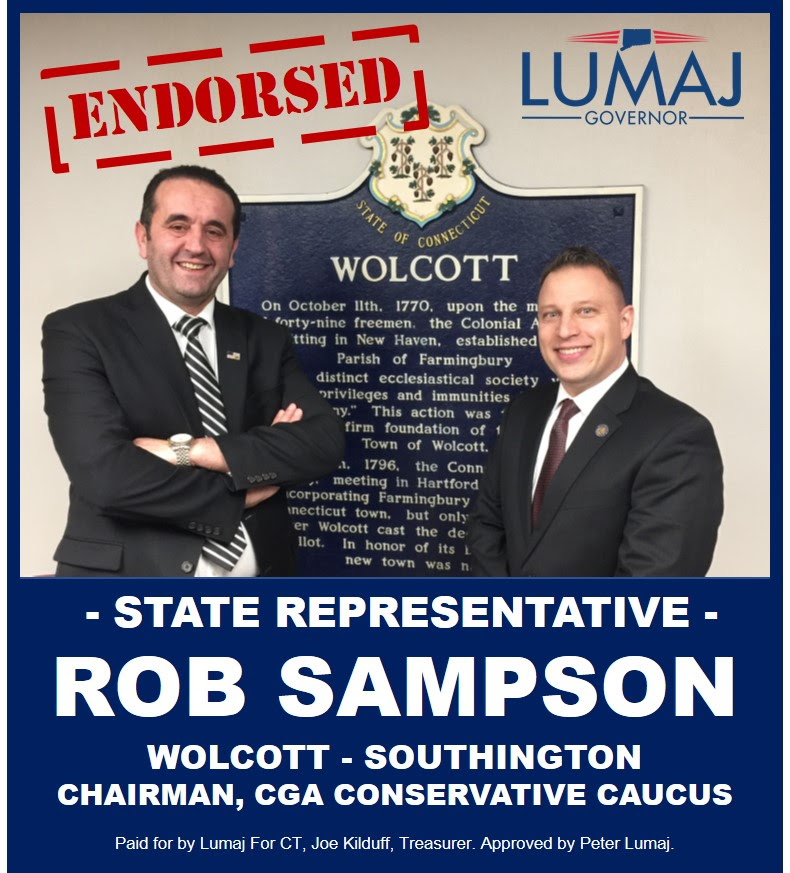 Wolcott, CT, February 1, 2018 – Peter Lumaj, Conservative Republican for Governor, announced the endorsement of State Representative Rob Sampson (R-80) this afternoon in his bid to become the 2018 Republican Party Nominee for Governor of Connecticut.
“I am proud to endorse Peter Lumaj as my candidate of choice for the next governor of the State of Connecticut,” Sampson stated. “Peter is not only a smart businessman who shares my conservative Republican ideology. He also shares my values as a proud American and knows exactly what changes need to be made to create a better future for Connecticut” Sampson stated.
Sampson joins a growing list of Republican leaders throughout Connecticut supporting Lumaj’s campaign ahead of the 2018 Connecticut Republican Party Convention that will be held at Foxwoods in May.

“Peter understands the state's problems thoroughly and I know him well enough to know that he has the added qualities of reliability and fearlessness - often where others who talk a good game fall short.” Sampson continued, “I know Peter will do what he says, and I look forward to working with him to get the job done.”
“I am excited to have the support of conservative leader, Rob Sampson. Rob is a strong and fearless legislator in the General Assembly. I have admired his leadership and robust defense of conservative ideals within our state throughout his four terms as a State Representative,” Lumaj stated. “I applaud his tireless work fighting back against the liberal agenda of Dan Malloy and the Democrats in Hartford. Rob is both an influential legislator and a good friend - I am thankful for his endorsement and I greatly look forward to working with him as we create a fresh start for Connecticut.”
Reprinted as a public service.
By Middletown Insider - February 05, 2018