Red Notes From a Blue State - McDonald Is No Conservative 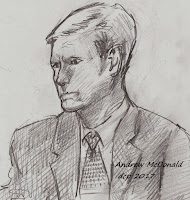 On Capitol Report, Roy Occhiogrosso, Governor Dannel Malloy’s chief cook and bottle washer during his first term, had this to say about State Supreme Court Associate Justice Andrew McDonald: “I worked with Andrew, as you know for a couple of years.”

Before being appointed by Malloy to the Supreme Court, McDonald was the Senate co-chairman, along with House Rep. Mike Lawlor, of the Judiciary Committee. Occhiogrosso continued, “I’ve known him for a long time – very smart, very careful, very conservative in the sense that he observes the bright lines he is supposed to observe.”

It is telling that Occhiogrosso, who perhaps knows the mind of Malloy better than most, should be constrained to announce that McDonald is in some approvable fashion conservative. Some legislators, not all of them conservative, might more justly argue that McDonald has rarely seen a bright line he has not ventured to cross.

Is it possible that McDonald’s political patron, Malloy, is anticipating an assault from right-reasoners when his nomination of McDonald for Chief Justice of the State Supreme Court is put before the legislature for approval? Could it be that Occhiogrosso’s eccentric characterization of a “conservative” McDonald was offered as a deflective insurance policy against McDonald’s historic, Stakhanovite leftism?

Certainly McDonald’s agitation against the death penalty when he was serving as co-chair of the Judiciary Committee was not recognizably conservative. At the time, eleven murderers were awaiting their just punishment on Connecticut’s Death Row, all of them having had the benefit of two trials, one to determine their culpability and a second hearing before a jury to determine whether the death penalty in their case was justly applied. Past legislatures, the current legislature, the numerous family members of the victims of those awaiting punishment, all agreed that the death penalties
imposed were just and legally appropriate – particularly in the case of two felons convicted of rape and arson-murder while on parole. The two had murdered three women in Cheshire, a gruesome crime that made it impossible for then Senator Edith Prague, certainly no conservative, to cast her vote in favor of a measure that would vacate the death penalty against the eleven Death Row murderers, all of whose crimes were horrific enough to warrant their just punishment.

The State Supreme Court, implausibly arguing that evolving moral standards rendered the application of the death penalty unconstitutional, later vacated the sentences of the eleven murderers on Death Row. The moral standards evolved rather quickly, since the General Assembly, which represents the whole political community in Connecticut, had earlier voted to retain the death penalty in the cases of those awaiting punishment on death row. McDonald, by that time a recent Malloy appointment to the State Supreme Court bench, did not recuse himself from this decision, although his prejudice against the death penalty had been displayed publicly – one might even say brazenly displayed -- when he was co-chair of the Judiciary Committee. A bright line had been crossed.

And this was not McDonald’s first bright line. Along with co-chair of the Judiciary Committee Mike Lawlor -- later to occupy a new position approved by his patron, Malloy, as Connecticut’s Under Secretary for Criminal Justice Policy and Planning – McDonald inflamed Catholic priests and bishops in Connecticut when a measure that would have changed the apostolic structure of the Catholic Church was presented for approval to the General Assembly in an end of session omnibus bill, a classic “pig in a poke” device to disorder the entire Catholic Church. “The bill,” this writer noted at the time, “was included under a group of 78 generic legal umbrella concepts and entitled ‘modifying corporate forms.’ This manner of authorizing bills is not unusual, but had the bill been titled ‘modifying the apostolic structure of the Catholic Church, the title might have awakened more interest among members of the judiciary committee.”

A massive rally at the Capital reminded the co-chairs of the Judiciary Committee that certain proprieties – among them fidelity to the First Amendment’s free exercise of religion clause, which at a minimum would prevent a re-ordering of the apostolic nature of the Catholic Church – were bright lines that should not be crossed with impunity. James Blaine, author of the rabidly anti-Catholic Blaine amendment, was less artful than McDonald and Lawlor, both of whom pointed out that their fingerprints could not be found on the bill, which should have been properly identified, ventilated
and killed in the Judiciary Committee over which they presided. The rally reminder did not prevent outgoing governor Malloy from awarding political preferments to both co-chairs.


To read the rest of Don's commentary, visit his web site.
By Middletown Insider - January 27, 2018