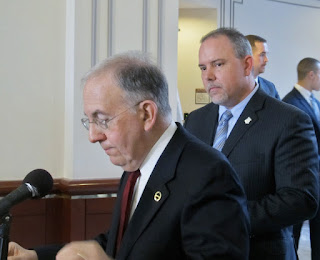 Democrats, the ruling party in the General Assembly for the past thirty years, have been very hard on Connecticut. Most economists worth consulting agree that the state is under water, blowing bubbles, and all the usual stratagems to which Democrats have in the past resorted to pull the near corpse aboard – tax increases, more regulations, moving budget money from one or another “lockbox” in order to cover deficits, plundering the rich – have only made festering problems worse.
The General Assembly now has produced a compromise budget, and some thoughtful analysts have argued that this compromise will compromise a winning Republican campaign in 2018.


They have a point. The compromise budget is for the most part a Democrat budget. Only a handful of Republicans -- among them Rep. Rob Sampson, who is well named, and Senator Joe Markley, this year running for Lieutenant Governor – voted against the compromise budget.
Republicans in Connecticut want a vigorous, authentic campaign from Republican leaders. The new comity between Democrats and Republicans in the General Assembly is not unheard of among incumbent politicians of opposition parties prior to important elections. Campaigns are crucial; they provide light and lucidity to voters who, here in Connecticut, have long been in a rebellious mood.
Recent losses in some suburban municipal elections have been attributed to President Donald Trump’s acerbic nature and the failure of national Republicans to repeal and replace Obamacare. Already, Democrats in Connecticut are beginning to harry Republican leader in the House Themis Klarides because, they argue, she had supported Trump. It is not altogether certain that the Trump presidency will plunge Connecticut into darkness and despair. Connecticut is over-reliant on financial firms, which appear to be recovering from the President Barack Obama business slowdown, and orders for military hardware are up, always a boon for Connecticut.

Republican approval of the compromise budget will alter the messaging of Republicans as the 2018 election draws near. Napoleon used to say never interrupt your enemy when he is making a mistake. Compromise – and even worse, silence – signifies assent. Democrats already had seized the political watch towers overlooking state employee union salaries and benefits. Republicans had been excluded from any discussion on deals Governor Dannel Malloy had arranged with SEBAC, an important front won by Democrats. Contracts favorable to unions, affirmed by a Democrat dominated General Assembly and signed into law by Malloy, were pushed far out into the future; the terms of the Malloy-SEBAC deal will not expire until 2027.
This strategic victory on the part of Democrats had been mitigated somewhat by a Republican budget that, miraculously, passed both Houses of the General Assembly. Republican voters began to see at this point a road to a winning campaign in 2018. Malloy had fashioned a hangman’s noose for backsliding Democrats and fragile Republicans: If some variant of his program was not incorporated in the budget, he would bring the hammer down on municipalities, forced under Malloy’s plan to absorb one quarter of educational grants assumed by the state.
The Republican budget, and later the compromise budget, stayed his hand and removed what may have been a strategic feint. Some stalwart Republicans at the time were arguing that Republican leaders in the General Assembly should not have interfered. They had only to do nothing, and then, in the 2018 elections, punished municipalities would have dropped into the Republican bucket. Democrats had sown destruction and disorder; let’m reap what they had sown.
But Republicans instead chose to compromise, removing the noose from Democrats' necks.
Republican leaders in the General Assembly have pleaded necessity. They had to combine with progressive Democrat leaders to produce a “third way” budget that, assuming Democrat cooperation in the future, would represent a march forward towards a brighter future and a step away from past ruinous policies.
To read the rest of Don's commentary, visit his web site.