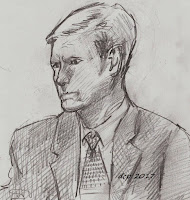 Sir James George Frazier, author of “The Golden Bough,” an examination of pre-literate, pre-Christian social mores among primitives, tells the story of a ritualistic punishment involving a murder. The foul deed was done with a knife. The village elders gather together in a hut and call witnesses to give testimony. First the presumed murderer is closely interrogated, then the family of the victim. Last of all, the knife is called to testify. Closely examined, it is pronounced guilty and suitably punished by the elders, who execute the weapon by throwing it in the river. Scapegoats are sometimes used for the same purpose; they are guilt receptacles that receive blood-guilt and are afterwards destroyed.


The solution to murders involving guns proposed by Connecticut U.S. Senators Dick Blumenthal and Chris Murphy appears to be, on the face of it, pre-Constitutional – indeed, pre-legal -- and primitive. When innocent school children and some staff members of Sandy Hook Elementary School in Newtown are murdered by a 21 year old recluse who has a passion for violent internet games – and then the murderer commits suicide, precluding the usual trial process -- justice requires the production of a scapegoat, say the National Rifle Association (NRA), upon which guilt may be heaped, usually for political purposes.
The senators gather together in their political huts, make inquiries, identify and question victims, after which the assault weapon is brought forward. The murder weapon, say an AR15, is suitably charged, pronounced guilty and disposed of. The village elders are praised, retire to applause, go home and sleep the sleep of the just, hoping that no one else in the village may be murdered with assault weapons they have not yet pronounced guilty.
In the modern parable, the family members of victims, their lawyers, their supporters in Congress and in the media, have accused not only the weapon used to wrest from them their innocent sons and daughters, but the maker of the weapon as well; not even the pre-literate, primitive villagers in Frazier’s account were so bold as to hold accountable the maker of the knife they pronounced guilty of murder. But then, there were no 21st century lawyers among them, and no modern politicians hanging their elections on sympathy hooks.
Modern law is coldly just, not persuaded, usually, by convincing displays of emotion. When a murder occurs, blind justice insists, usually, that the murderer be held responsible for his actions, and not the implement he uses to commit his crime – still less the maker of the instrument of destruction. There is no rule on earth to which there is not at least one exception, Cardinal John Henry Newman tells us. And so in this case, there are exceptions.

A thief steals a car. In it is a small baby. In his haste to get away, the thief runs the car into a tree and the baby dies. Thieves are notoriously poor, but can monitory retribution legally be sought from the far wealthier car maker in this case? The answer, generally, is no – unless the accident had been caused by a defect for which the car maker may be held responsible.
In the Sandy Hook slaughter, the gun used by the shooter, an AR15, was lawfully purchased by the killer’s mother, murdered by her son with a different weapon, a .22 rifle. The use of the AR15 in the commission of the crime obviously had not been authorized by the purchaser; apart from psychological defects, this may be the reason the murderer committed matricide. It is obvious also that the weapon was not defective. The question arises: Is the connection between the manufacturer of the AR15 and the shooter so attenuated in this case that a suit should be denied? Superior Court Judge Barbara Bellis already has answered that question affirmatively; her ruling  has been appealed to the Connecticut Supreme Court, which has agreed to hear the case.
This columnist will not try the case here or venture to guess how the court will decide the issues before it.
To read the rest of Don's commentary, visit his web site.
By Middletown Insider - November 20, 2017