Red Notes From a Blue State - The Fifth Democrat Budget 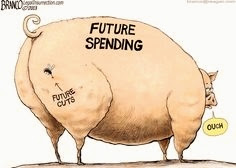 That the compromise budget is predominantly a Democrat production should come as a surprise to no one. Weighing gains and losses in the scales, the left in Connecticut, best represented by Speaker of the State House Joe Aresimowicz, a union employee, has prevailed over its opponents.
The state’s Capital City, Hartford, teetering on the brink of bankruptcy, will receive a bailout from state taxpayers, at best a temporary solution to long- brewing, unresolved problems centering on the city’s hegemonic political structure, and a virtual guarantee that the city’s political shakers and movers will be bellying up to the bailout bar again in the not too distant future. UConn funding, cut in the Republican budget that had passed both Houses of the General Assembly, has been restored. Major changes in employee pensions, a prominent feature in the Republican budget, were dropped – but not, Republicans remind us, as a campaign issue.


Democrats yielded on shifting teacher pension costs to municipalities, a major feature of Governor Dannel Malloy’s rule by executive order regime. Republicans did succeed in imposing a cap on state spending as well as limits on the bonding of long-term capital projects, though they would be wise to make certain that proper enabling legislation is attached to the measures.  Some months ago, Attorney General George Jepsen advised that the constitutional cap on spending, a feature of the Governor Lowell Weicker income tax measure, was unconstitutional because the General Assembly had never supplied definitions necessary to enable the bill.
Taxes, a litmus test issue for Republicans, will be increasing – again. Malloy, the outgoing Democratic Governor has now, with the concurrence of the dominant Democrat General Assembly, raised taxes three times. The lame-duck Governor is the author and inspiration of the largest and second largest tax increases in state history, one of the reasons his approval rating is in the tank. In a pot calling the kettle black political strategy, much will be made by Democrats in upcoming campaigns of Republican duplicity on their unbudgeable no tax increase pledges, although it will be obvious to all that Republicans yielded to a superior political force wielded by Democrats.  Not sweet reason -- Democrats were never interested in palavering with Republicans on budget matters -- but superior force and numbers wielded by Democrats shaped the final budget product.

Malloy’s reaction to the compromise budget was, some think, bitter – possibly because he was excluded from deliberations on what many hope may be the final budget product in Connecticut – but perfectly in keeping with his overbearing nature. General Assembly members wanted a budget they could live with; which is to say, they wanted a budget they could campaign on. Malloy, who bade goodbye to future campaigns months ago, need no longer struggle to run on his lamentable record in office. Had he chosen to run again, he doubtless would have sunk the re-election prospects of his fellow Democrats.

The compromise budget – such as it is – should be considered a prelude to the upcoming 2018 elections.

To read the rest of Don's commentary, visit his web site,here.
By Middletown Insider - October 21, 2017