Don Pesci - Where There’s A Hole, There May Be A Loop 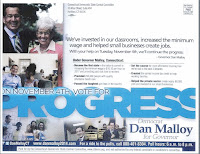 There is a hole in the state’s clean election law. Rigorously observed, the law is supposed to prevent state politicians from wresting campaign contributions from contractors and other business associates whom political officials oversee. The hole is quite legal, but it violates what ethicists sometimes call the “spirit of Connecticut’s clean election law.” The clean election law was adopted in Connecticut soon after then Governor John Rowland was sent packing to prison for the first time on corruption charges.
The hole most recently became apparent when Attorney General George Jepsen, once Chairman of the state Democratic Party, persuaded a host of Connecticut lobbyists, business executives and deep pocket one-percenters to cough up campaign contributions for Mark Herring, a friend of Jepsen who finds himself in a tight race for Attorney General of Virginia. The controversy surrounding Jepsen and Herring may or may not be – the reader must forgive the irresistible pun -- a red-herring.


“It’s all perfectly legal,” Hartford Courant investigative reporter Jon Lender writes in a recent story, “and the contributions have been listed, as required by law, on the latest campaign-financing report of the Virginians for Mark Herring campaign committee… But the episode still raises the question of whether Jepsen’s actions are consistent with his longstanding expressions of support for Connecticut clean-election laws designed to eliminate ‘even the appearance of [an elected official] being beholden to special interest groups.’”
There are two dangers when politicians who have built their careers as white knights by denouncing the appearance of corruption are found flirting with corruption. First, not everyone is a lawyer who understands and profits from vagaries in written laws. Most people who voted for Jepsen as a welcome change from his predecessor Dick Blumenthal, now a U.S. Senator, do not specialize in subtleties and so may not always distinguish the “appearance of corruption” from corruption itself. The second danger is that where there is a hole in the law, there may be a loophole.

About sixteen months ago, Governor Dannel Malloy – like Jepsen, a lawyer – sought to take advantage of a loophole in Connecticut clean election law, which forbids the politically favored from favoring politicians with “illegal” campaign contributions.  The law is written in such a way as to require  Connecticut politicians or their party to pay for costs associated with their own political mailers. Malloy signed off on a campaign mailer that had at its bottom a fly-speck notice detailing instructions to polling places. A copy of one of the artfully contrived mailers is shown above.
Then Republican Party Chairman Jerry Labriola asked for a ruling from Connecticut’s State Elections Enforcement Commission (SEEC) on what he regarded as a campaign advertisement that had violated the state’s clean election laws. Eventually, after the Democrat Party threatened to appeal an adverse ruling from the SEEC in court, the Party agreed to settle the matter by paying a substantial fine of $325,000. Malloy’s lawyers argued that the notice at the bottom of the campaign mailer federalized the document, immunizing it against Connecticut’s clean campaign laws.
“The party,” CTMirror reported at the time, “admitted no wrongdoing and the settlement characterized the $325,000 as ‘a voluntary payment,’ one roughly equivalent to the value of the disputed expenditures.”
It was a near noose. Everyone breathed a sigh of relief. Democrats avoided having to disclose possibly embarrassing e-mails in a discovery process had the case gone to trial, and Michael Brandi, the general counsel and executive director of the elections commission, gave assurance that “the [Democrat] party agrees to new guidelines that resolve a significant conflict in state and federal election law and [to] end litigation that could have produced a court ruling curtailing the ability of state regulators to enforce the Rowland-era campaign reforms enshrined in the Citizens’ Election Program.”
House Minority Leader Themis Klarides remarked, “They can call it whatever they want, but the $325,000 fine is unprecedented and proves the seriousness of this violation of the law.” The previous SEEC record settlement was a puny $20,000. People who were not lawyers, watching from the sidelines, sensed that some foul beast had dragged a bloody corpse through Connecticut’s clean election law house.
Asked whether he had violated the principle or spirit of Connecticut’s clean election law by procuring for his friend campaign dollars from people whose business activities he might someday oversee, Jepsen replied, “It’s self-evident that I don’t benefit directly from it, and if the legislature had wanted to prohibit this kind of activity they certainly could have done so, but they did not...They chose to draw the line where they did.”