Rep. Sampson Calls on Gov. Malloy to Uphold Will of the People, Sign Bipartisan Budget 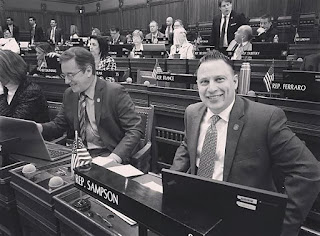 HARTFORD – State Representative Rob Sampson (R-80) joined a bipartisan effort in the Connecticut House of Representatives to pass the Republican, now bipartisan budget, approved late last week by the Senate in a 21-15 vote, and now en route to Governor Malloy for his signature. The vote took place during a special session of the House on Saturday, September 16, 2017 after months of discussions at the Capitol.

“Under the Governor's proposal, the towns I represent would have lost millions of dollars, which would have led to huge reductions to education, damaging schools and punishing teachers and staff, while increasing our property taxes by maybe hundreds of dollars for each property taxpayer,” said Rep. Sampson. “Majority leadership was calling for tax increases on hospitals, vacation homes, cell phone bills, e-cigarettes, a reduction in the property tax credit and a surcharge on homeowner’s insurance premiums. Connecticut residents and businesses were always expected to give more, and receive less in return under Malloy’s leadership, but on Saturday we took a strong stand against the old way of doing things. The passing of this bipartisan document was the result.”

This budget balances the state’s $3.5 billion deficit by making structural changes to Connecticut’s financial structure, agencies and departments. Spending would be focused on core government functions including municipal aid, education cost sharing and services for those with mental and cognitive limitations, all without raising current taxes or imposing new ones. The core premise of the GOP’s proposals was to stabilize the state’s political and economic climate in an effort to retain current business leaders, and attract new investments. Several companies that have relocated to other areas of the country have cited Connecticut’s unpredictable tax and credit climate as major factors in their decisions to leave.

“This plan is actually remarkable in the way that it continues to protect the disabled community, seniors, and children considering the limited options available to us,” added Rep. Sampson. “Of course there are things each of us will find to disagree with in this bill. There are things I absolutely do not like in this budget. However, a budget is a document that requires a majority of legislators to agree with before it can pass and, therefore, is going to be a blend of positive elements you do like, and those you don't like, but can live with. It's not perfect, but it is the best and most responsible budget Connecticut has seen in a generation, and voting for it was the best decision I could make with the choices before me. Of course, I supported it.”


“If the governor vetoes this plan, what happens next is on him,” concluded Sampson. “October 1st will come, drastic cuts to municipal aid and education will take effect, and we will have officially passed this problem onto future generations. I hope every person in the State of Connecticut, including Governor Malloy, understands the historical significance of this moment, and the importance of the decision before us.”

The bill is now in transit to Governor Malloy who will either sign it into law, veto the bill, or take no action, in which case the budget becomes law. In order to override a veto, the bill must pass each chamber with a two-thirds majority. If a budget is not signed into law by October 1st, the governor’s executive order will go into effect, which is expected to have major implications for local governments and school districts.
By Middletown Insider - September 19, 2017