Glastonbury, CT (August 9, 2017) — Prasad Srinivasan, declared candidate for Governor in 2018, announced that he has reached the $250,000 threshold for qualifying under the State’s Citizen Election Program (CEP).

“This is a big step, but it is just the first step,” Dr. Srinivasan said. “All of the credit goes to our many supporters across the State, who have carried us over the finish line. Since beginning this journey last year, we have received contributions from residents of 125 towns and cities in Connecticut, and met many eager voters who are interested in my message.”

“With fundraising out of the way,” Dr. Srinivasan said, “we will make our case to the people of Connecticut that I am the best candidate to revive our State and make it prosper again."

Dr. Srinivasan is a four-time State representative from Glastonbury. A practicing physician in Greater Hartford, Dr. Srinivasan has been elected to office by overwhelming margins ranging from twelve to thirty-five points. Dr. Srinivasan is an Assistant Republican Leader in the State House of Representatives who currently serves as the Ranking Member of the legislature’s Public Health Committee, and also serves on the Judiciary and Environmental Committees. 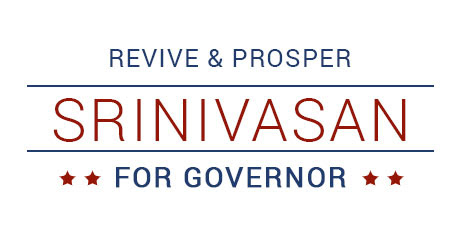 To learn more about Prasad or to volunteer, please visit www.docforgov.com.