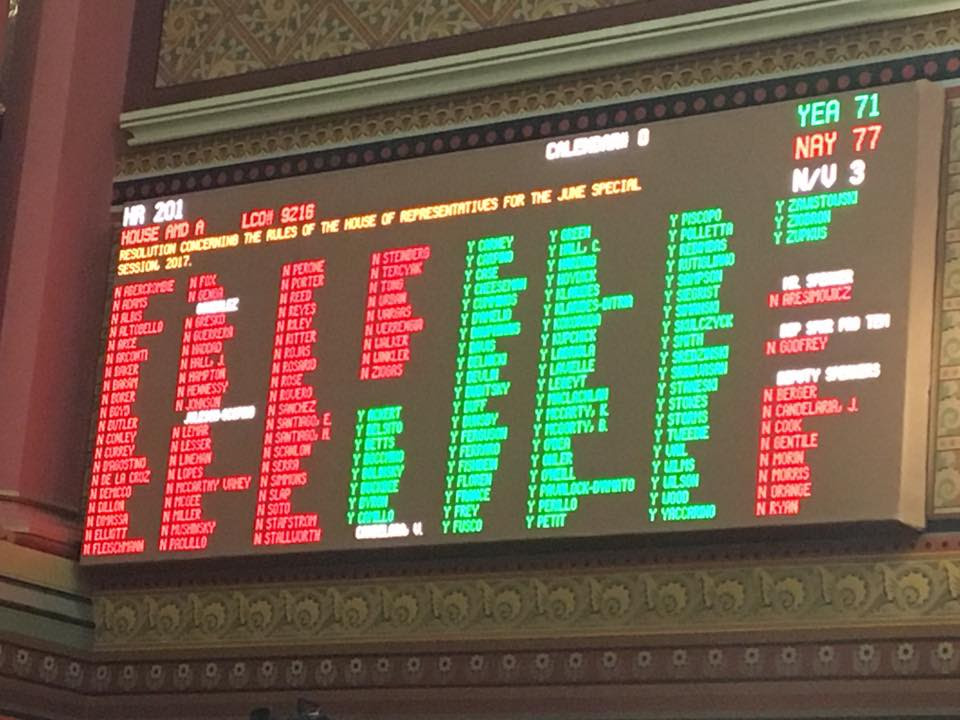 Here we are approaching August and the Democrats are still refusing to allow a budget -- any budget! -- to be brought to the House floor for an open debate and vote.

I have heard people say both parties are equally at fault. On some issues they may well be right. However, in the case of the current state budget debacle, the fault falls squarely and exclusively on the shoulders of the House Democratic leadership. Nobody else has the power to bring a budget to the House floor for debate.

To date, House Republicans have proposed four separate balanced budgets plus a short-term stopgap “mini budget,” each of which has accounted for changing revenue projections and other developments over time. All of which have been fully vetted by the Legislature's non-partisan staff. None of which raise taxes, add tolls, shift teacher retirement costs to municipalities, or cut the middle class property tax credit. Yet despite the pain being wrought upon our people and our municipalities by having no state budget in place this late in the fiscal year, the House Democrats won't even let us debate a budget for fear that it might actually pass.

The Democrats have the majority, and as they have been doing for the past 40 or so years, they are deciding what gets a vote and what does not. On Monday, House Republicans tried again to debate the state budget, but again the Democrats, on a party-line vote, blocked our every effort as if being without a state budget in July was no big deal.

Since adjourning the regular session on June 7th, my Republican colleagues and I have come back to Hartford on three separate occasions hoping to debate and vote on a state budget. Yet here we are at the end of July (almost a month into the next fiscal year) no closer to enacting a state budget than when the Regular Session started in January. You deserve better!

You deserve to know how much you will be taxed in the coming year and how your tax money will be spent.

As your State Representative I will continue to fight for you. Please feel free to contact me if you would like to discuss the state budget or any other issue before the Legislature.

Doug may be contacted anytime at Doug.Dubitsky@cga.ct.gov or 1-800-842-1423. You can also follow his legislative activity by visiting his website, http://www.cthousegop.com/dubitsky/.