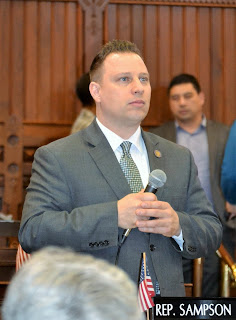 Sampson’s bill, An Act Establishing Patriots’ Day, called for the establishment of a statewide holiday on the third Monday of April each year in observance of the Battles of Lexington and Concord (fought on April 19, 1775) and the beginning of the American Revolutionary War. Section 78 of the bill requires the Governor to proclaim this holiday and allows for “suitable exercises” at the State Capitol and elsewhere to commemorate the anniversary of the battles.

“I am proud that this unpaid holiday will now be recognized and observed statewide,” said Rep. Sampson. “Our freedom came at a great cost and it is our humble duty as citizens to honor those who gave their lives during these battles and throughout the war. I would like to thank all those who supported this legislation both in the General Assembly and across the state, particularly Wolcott resident Stacy Perrone Petta and the town of Wolcott for being strong advocates for recognizing Patriots' Day since we began this effort.”

Connecticut now joins neighboring Massachusetts and other states such as Maine, Wisconsin and Florida in the recognition and commemoration of Patriots’ Day.

After receiving passage from the Senate unanimously and 149-1 in the House, Public Act No. 17-204 has been signed into law by the Governor.
By Middletown Insider - July 14, 2017