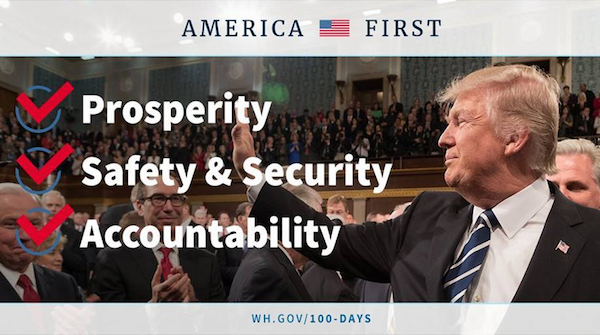 During the first 100 days, President Trump has done more to improve America and to stop the Government from interfering our daily lives during than any other President in history.
Together, anything is possible!

Despite historic Democrat obstructionism, President Trump and Congress have passed more legislation in the first 100 days than any President since Truman by enacting 28 laws.

Read about President Trump’s successes this week in our newsletter below.

In his first 100 days, President Trump has taken bold action to restore prosperity, keep Americans safe and secure, and hold government accountable. At a historic pace, this President has enacted more legislation and signed more executive orders than any other president in over a half century. With a focus on rebuilding the military, ending illegal immigration, and restoring confidence in our economy, the President is keeping his promises to the American people.


The Most Significant Tax Reform Legislation Since 1986

President Trump has made tax reform a priority, and we have a Republican Congress that wants to get it done. President Trump is going to cut taxes for businesses to make them competitive and cut taxes for the American people – especially lower and middle-income families. The President is going to seize this opportunity by leading the most significant tax reform legislation since 1986 – and one of the biggest tax cuts in American history. 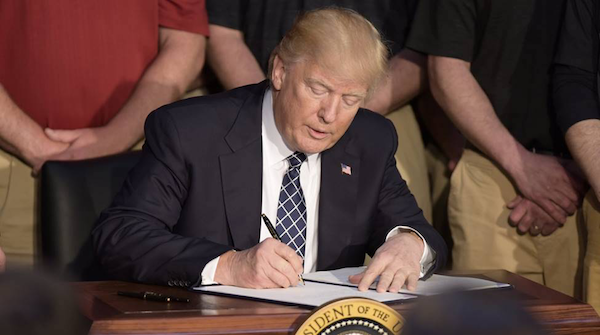 Although you won’t hear about it in the media, President Trump is looking out for Americans around the globe. An Egyptian American charity worker who was imprisoned in Cairo returned home to the United States after the Trump administration quietly negotiated her release. The President and his team successfully worked with the Egyptian President to free Aya Hijazi after being held for three years in Egypt. "We are very happy to have Aya back home," the President said while meeting her at the White House after her release. 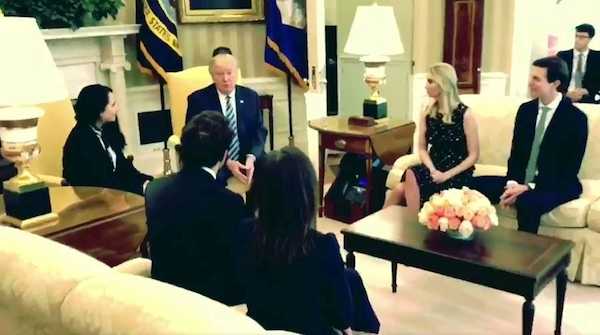 
President Trump spoke with three brave American astronauts, two joined him live from orbit around the International Space Station. One of these incredible Americans, Commander Peggy Whitson, was congratulated by the President for breaking the record of most total time spent in space: 534 days and counting! This is a very exciting time for our country, in terms of jobs, business, and space exploration - and there’s endless excitement and enthusiasm for our future. Watch their meeting by clicking here. 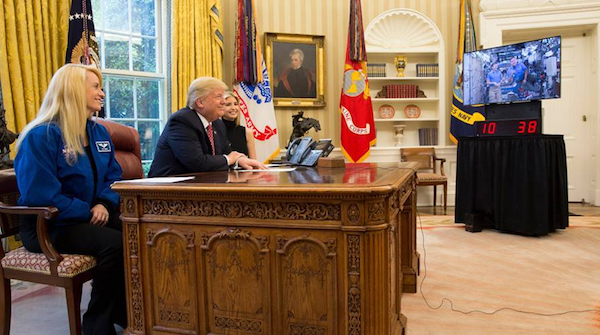 President Trump visited the United States Holocaust Memorial Museum to remember the Jewish lives lost during the Holocaust. President Trump pledged that as a nation we will confront anti-Semitism, stamp out prejudice, and condemn hatred. As President of the United States, he will always stand with the Jewish people -- and he will always stand with our great friend and ally, the State of Israel. 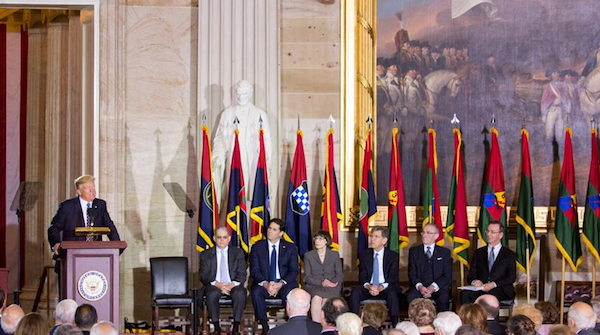 During his first 100 days in office, President Trump has exhibited a clear vision, resolute leadership, and an uncompromising dedication to the American people just as he promised throughout his campaign.

His commitment to the needs of America’s veterans, his work to promote women entrepreneurs, and his championing of American workers have proven him the right leader to put “America First” and get the job done.

Make sure to tune in tonight to President Trump’s rally in Harrisburg, PA on his 100th day in office! You can watch it live on our Facebook page by clicking here.

Thank you for being a part of our team!