SOUTHINGTON -- Matt Lesser continued his hypocritical bullying Wednesday night in Derby.  After recently being taken to task on his baseless complaint that House Republican Leader Themis Klarides, one of the brightest and most respected legislators in Connecticut, is a bigot, Lesser is doubling down.


"I find it extremely disheartening and disconcerting that the Derby Democrats would invite someone who called Derby's most respected legislator a bigot to our high school" said Connecticut Republican Party Chairman J.R. Romano.  "Employing this rhetoric because Representative Klarides doesn't support his bill is not prowess, it's an ill fated temper tantrum.  Representative Klarides has pointed out Lesser was playing politics and failed to realize that his own female staffers are paid 15% less than their male counterparts." 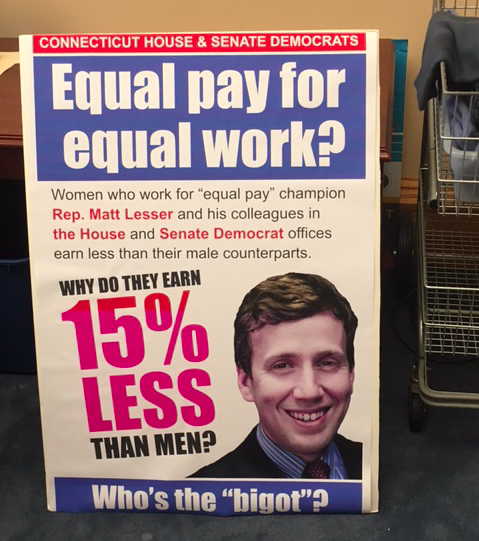 Matt Lesser was the featured speaker at a Progressive Town Hall Wednesday, which showcased what's wrong with the Connecticut Democrat Party and spotlights why we need new leadership in Derby.  If Anita Dugatto and Carmen DiCenso are encouraging such hypocritical and toxic behavior from their party, they have proven that they and the Derby Democrats are completely out of touch with the hard-working families in the city.