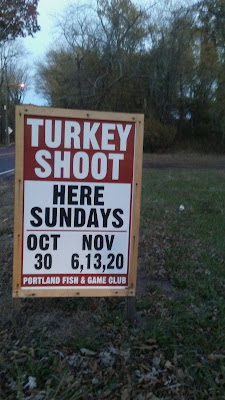 This Sunday, the Portland Fish and Game Club hosts its third turkey shoot in this year's annual four week event, leading up to Thanksgiving.  The shoot is held in the field across from the Portland Fair Grounds on Rt. 17A in Portland CT and is open to the public.

Also available are a variety of food items, which have included clam chowder and venison.  The winner of each course of fire receives a frozen turkey (which is why it is called a "turkey shoot").

In times past, a turkey shoot involved a live turkey tied so its head protruded above a log.  The shooter who killed the bird won the contest.  At the last shoot I attended some years ago, "X" cards are hung and the shooter who's shot (pellet) is closest to the "X", wins a frozen bird.  I failed to inquire, but it seems they are using something other than an "X" card, today.

Come down, make some new friends and enjoy the comradery of fellow sportsmen and women.  Parents are encouraged to bring their children.