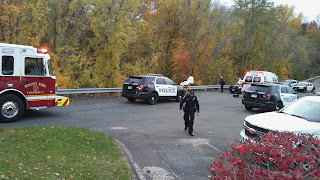 Witnesses said they heard a disturbance and saw a man who appeared to be intoxicated walking past their house flailing his arms and wielding a knife he had drawn from behind his back.  There were two other people, a man and a woman, with him.

He was quoted as saying "I don't want to kill my own son".  Another witness said they were yelling at each other.  A young man pointed and called out from the sidewalk adjacent to the woods, "They got a man in handcuffs, down there".  While two people identified as being part of the incident were seen leaving the area, the man in handcuffs was apparently taken into custody.

At the time, the witnesses stated they had not been interviewed by police.

There were at least five cruisers, two firetrucks, an ambulance and a vehicle from Middlesex Hospital on the scene.  The firetrucks appeared to be positioned so as to obstruct the public's view.  Both
Cassandra Day of the Middletown Press and this reporter were denied access to the scene, police
officers citing "sensitivity toward the family".  They refused to provide any information to either of us, though they knew we were members of the press. 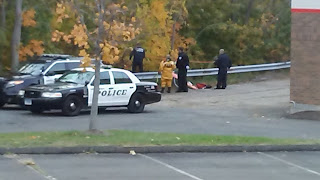 When I refused to obey an unlawful order to leave the sidewalk, an officer, who was anything but polite or respectful, in fact he was downright rude and disrespectful, took a roll of yellow tape, tied it to a nearby telephone poll and strung it out at least 100 feet.

For an update on the situation, watch the Middletown Press.
By Middletown Insider - November 06, 2016