UPDATE: Connecticut State Police - The Good and the Bad

UPDATE:  The Connecticut State Police Union has issued a press release regarding the lawsuit filed by Micheal Picard against three state troopers, calling it "frivolous".  The presser can be seen at the end of this post, along with a new report from WTNH.

Followers of this blog will attest to the fact that I have no qualms about exposing bad behavior from law enforcement officials.  Some might get the notion that I have it out for cops; that I might be a cop-hater.

Before I go any further, let me give some personal back ground that might help to dispel that notion, if it should exist.

In the US Air Force, as a Small Arms Specialist, I trained many Security Police and Law Enforcement Specialists. 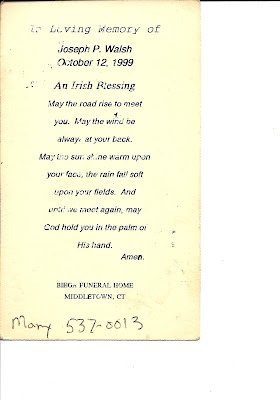 In 2004, I spent part of my vacation time helping a high school friend, Vernon Stanforth, get re-elected as county sheriff.  He is still sheriff, today.

More locally, Joe Walsh was a personal friend of mine.  No, not the Joe Walsh from the Eagles, but Joe Walsh the former High Sheriff of Middlesex County.  In fact, I helped provide for his care in his latter days.  Art work that once belonged to him now hangs on my wall.  His nephew gave me the combat knife he was issued in WW II.  I called him Uncle Joe.

As evidence of our friendship, I offer a photo copy of the prayer card from his funeral in 1999.  (Mary's phone # has long since been changed. :) )

Recently, I had occasion to give a statement to Trooper Matt O'Brien of the Westbrook State Police barracks.  A young man in his thirties, he came to my home and when I answered the door I was greeted by a sharp officer.  He was well groomed and his uniform was impeccably crisp.  He smiled and introduced him self and asked if I wanted to talk outside or in.


I invited him in and we sat at my kitchen table for well over an hour.  During that time, he listened intently to what I had to say and examined the documentation with which he was presented, with interest.  He asked questions.  We engaged in conversation.  This whole time, he treated me with the mutual courtesy and respect due one person to another.


Trooper O'Brien was the consummate professional; an exemplary office.  The professionalism and courtesy he exhibited to me are much appreciated.  The next day,I called the Westbrook barracks and complimented him to his Sergeant.

Now, for the bad:

Not long ago, I came upon a post from 27 year old Micheal Picard.  It seems he was illegally detained and harassed by state troopers for openly carrying a fire arm, which is in itself, not illegal.  There is a memo issued by the state's attorney that states, "merely observing a person openly carrying

a handgun does not give rise to criminal suspicion because doing so is lawful".  While the memo affirms this, it does not prevent police from making a casual inquiry; what is seen in the videos seems to be anything but a casual inquiry.
Below you will find two videos posted to You Tube, one edited for time and the other the full length  of the encounter.  Both seem to clearly show the misbehavior of several state police officers.

Following the videos are links to two stories covering this incident, presented by WTNH News 8

"Back on Friday, September 11th, 2015, in West Hartford, CT, I was illegally detained, frisked and searched, and my gun, permit and camera were seized, I was threatened with arrest for interfering (apparently, freedom of speech passes for interfering), and the Connecticut State Police fabricated a story, on camera, to trump up the charges because they needed to charge me with something ("Let's give him something.") to cover their ass ("Gotta cover our ass."), charging me with "creating a public disturbance" for legally open carrying my firearm and "negligent pedestrian" for legally holding up a sign on public property, as well as being threatened with arrest (again) if I did not pay the fine.

I was detained for 40 minutes and charged for nothing more than legally open carrying and holding up a sign on public property. I never touched my gun once and I am a legal gun owner. My lawyer and I went to the first court appearance back on Thursday, January 14th, 2016, where the prosecutor offered a $25 fine, in lieu of the original $300 fine, to make the case go away. I rejected the deal because I did nothing wrong. As of now, the prosecutor has not dropped the case despite having video evidence of police misconduct. The trial date has been set for Monday, April 25th, 2016, at 9:30am, at the New Britain courthouse (20 Franklin Sq., New Britain, CT).

(The case has since been dropped as can be seen in the second report from WTNH.)