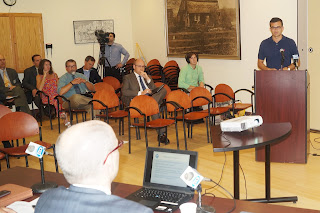 “The overall cost of living in Connecticut continues to grow and grow,” Sen. Linares told state transportation officials.  “From state tax hikes to health care expenses, costs keep going up year after year.  I hear this every day from people in the communities I represent.  I ask you not to increase fares.”
Rep. Carney noted that “The fares have risen significantly since 2012 and I am concerned about the negative impact that another increase will have on Connecticut's commuters. For many working people, this service is a necessity. It would be a shame to see increased traffic on the already overburdened I-95 corridor should rail fares become too high.”

The state is seeking to raise Metro-North and Shore Line East ticket prices by 5 percent on Dec. 1.

Written comments on the proposed fare hikes must be received by Sep. 15 at dot.farecomments@ct.gov .