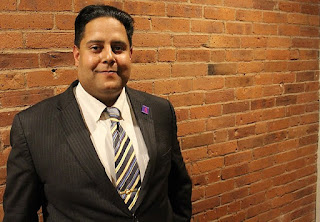 Do you have a gun here in the studio today?
No. I left my gun at home.

What if the Democrats come in and take you out?
I use my hands. I’m a Marine.

Angel Cadena, New Haven U.S. Rep. Rosa DeLauro’s Republican rival in this fall’s Congressional
election, developed an appreciation for the Second Amendment as a kid growing up on Chicago’s South Side, where he watched a gang member’s bullet strike his father.

Cadena was 13 years old at the time. He, his father, his 15-year-old sister Christina, and a friend of Christina had just taken a bus ride home from seeing Jurassic Park at a movie theater.
They were a block away from their home in the Gage Park neighborhood, where gangs like the Latin Kings were in business. Christina and her friend ran ahead.

Here’s how Cadena recalls what happened next:

Cadena was used to hearing and seeing bullets fly. This time was “a lot closer than usual.”
He saw his father stumble.

“I’ve been shot,” his father said. He told Cadena to run, and Cadena started to. Then “something made me stop,” Cadena said.

He turned around. He saw his father had been shot in the foot. The bullet remains in his father’s foot to this day.

“I put my arms around him. I went into the next gangway, the space between two buildings. There was a large fence. We were going to scale the fence. [But then] there’s a huge dog on the other side of the fence,” Cadena said.

There was no escape, as two armed young men pulled up on bicycles. Cadena’s father “put me behind him.” One of the young men put a gun to his father’s head. He pulled the trigger.

Read the rest and take the survey at New Haven Independent.
By Middletown Insider - September 11, 2016