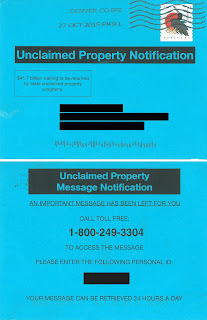 Friday, I received a postcard identical, down to the stamp but minus the post mark, to the one shown at the right.

Something about it seemed fishy, so, I did a little research and found, lo and behold, it is probably a scam!  Surprise, surprise!  But, then, maybe not. . .

According to the South Dakota Treasurer's Office;

"These solid blue, green, yellow or orange cards with a Denver postmark have been sent to various states including South Dakota.

"These postcards are not from South Dakota's Unclaimed Property Division or by any other South Dakota state agency," said Sattgast.

"The cards tell recipients to call a toll-free number and enter in a personal identification number provided on the postcard. A recorded message then instructs the caller to search a website for unclaimed property.


"Sattgast reminds South Dakotans that the state treasurer's office does not ask citizens to provide personal information through the use of a pre-recorded messaging system or charge a fee to return lost funds, both common scams related to unclaimed property.

If you believe you do have unclaimed property, visit www.sdtreasurer.gov or call the treasurer's office and speak to an Unclaimed Property representative directly at 1-866-357-2547."

Just for fun, I called the number and entered the personal ID number.  A lady's voice advised me to  begin my search by visiting "unclaimed.org".  Well, gee; why didn't they just put that on the post card?  Who knows?

Again I searched; this time, for "is unclaimed.org legitimate?".  It is, so it would seem.  AARP lists it as one source of finding out if you have money or property waiting to be claimed.  It says, "Just check Unclaimed.org, MissingMoney.com or contact the state treasurer's office in every state where you've lived."

AARP goes on to say, "Similar warnings about fraudsters with names that seem reassuringly legit have been issued in other states. In emails, phone calls and sometimes mailed letters, they may pose as or claim ties to government officials or the National Association of Unclaimed Property Administrators (NAUPA), a real organization that represents state officials who manage unclaimed property programs."  (NAUPA is the organization associated with MissingMoney.com.)

By the way, I didn't find anything under my name, but there was unclaimed property for several family members.