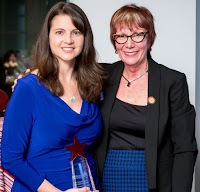 “The ability to share ideas and concerns on issues with legislative colleagues from around the country increases my perspective on local issues,” explained Rep. Carpino. Carpino is a member of the Public Health Committee and while in Washington D.C. for the Women in Government Public Health Conference, arranged to visit Capitol Hill and address local concerns with a Connecticut U.S. Senator on behalf of her constituents.

Rep. Carpino was the recipient of the Legislative Champion Award – Eastern Region. Specifically, Carpino was recognized for her work on several legislative initiatives spanning from legislation focused on increasing job opportunities and apprenticeships, coordinating services for the disabled and preserving veterans’ rights.The event was attended by more than 90 female legislators, event sponsors, and honored guests that included Congresswoman Alma Adams, the 100th woman to serve in Congress.

According to WIG, there are 1,783 women state legislators across the country.


State Representative Christie Carpino represents the 32nd District of Cromwell and Portland. She is Co-Chair of the legislature’s Program Review and Investigation Committee, and sits on the Judiciary and Public Health Committees.
By Middletown Insider - December 21, 2015