The Dangerous Tyranny Act of 2015 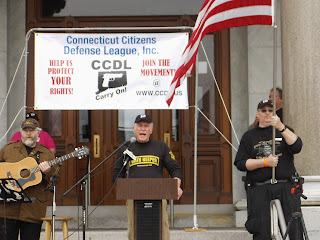 From the April 2013 rally at the capital.

11/24/2015
For Immediate Release:
The Connecticut Citizens Defense League (The state's largest grass roots gun rights group) is speaking out in opposition to recent statements made by Governor Malloy, and Senators Murphy and Blumenthal regarding the deceptively named “Denying Firearms and Explosives to Dangerous Terrorists Act of 2015”.
Comment from CCDL President Scott Wilson:
"I make no apologies for emphatically stating that all three of them are plainly and simply advocating for tyranny in the truest sense of the word. Everything that they are calling for is completely antithetical our rights as Americans. These proposals not only violate our 2nd Amendment rights, but our 14th Amendment rights as well. Their rhetoric about blanket gun control should concern every American regardless of their views on guns. They are actually advocating for the elimination of due process for citizens".
Key Points about the Watch List:

1) For the purposes of this proposed legislation, a “terrorist” is anyone whose name appears on the FBI’s terror watch list. This is not a list of known terrorists. As the name implies, it is just a list of people the FBI is watching for information about terrorism. A person might be watched because a relative, acquaintance or coworker is suspected of terroristic actions. They themselves may be law-abiding citizens.
2) Anyone can mistakenly and unknowingly end up on the terror watch list. You do not have to commit any crime to be added to the list Infants, US senators, Nelson Mandela, and the entire Ford Motor Company have all been mistakenly added to the watch list.
3) There is no deliberate means to remove yourself from the list should you mistakenly end up on it.
4) The criteria to end up on the terror list are unclear and vague.
5) We do not have a clue who is adding names to this list. Adding someone to the list is purely a bureaucratic decision with no accountability, and no opportunity for an individual to refute being added to the list. If Malloy, Murphy and Blumenthal have their way, citizens who have been charged with no crime will lose their Constitutional rights with NO due process.
6) Gun sales to individuals who are on the watch list are already reported to and approved by the federal government. They decline the sales for actual criminals.
Wilson concluded:
"Either we have rights as individuals, or we do not. Lawmakers continue to push down the road of gun control under the guise of concerns for safety, while many citizens in European countries are hiding behind locked doors wishing they had some means of protection with little help from police".
"If there are actual terrorists with plots or crimes being committed, the Federal Government and police already have the authority to act accordingly, instead of utilizing some list and Gestapo-style tactics against large swaths of the population".
___________________________________________
About the CCDL: The Connecticut Citizens Defense League was formed in 2009 by a small group of concerned citizens as a non-partisan organization to advocate second amendment rights in the state of Connecticut. Since their founding, the group has grown to over 20,000 members from across the state.
Thanks to this large supportive base, the CCDL has become a fixture at the state capitol, and well recognized by committees that see firearms related bills.
As the go-to organization in the state they are consulted regularly by lawmakers who have questions and concerns about pending legislation or existing laws. For more information on the CCDL please visit http://www.ccdl.us
Press Contact:
Scott Wilson
president@ccdl.us

Editors note:  The position well stated. Not to take away from that in any way; but for what it is worth, I would not characterize CCDL as a “gun rights” group, but as a civil rights group. The right to life, liberty and the pursuit of happiness requires that individuals have the means to secure their life, liberty and pursuit of happiness. That is the responsibility of the people, not the government. Herein lies the most fundamental of all civil rights.
By Middletown Insider - November 24, 2015