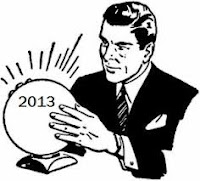 Prediction Time 2013
opinions expressed are solely that of the author and do not necessarily reflect that of the Insider staff.
Guest Blog by Tim Lenox


This is my Latest Tweet:
2013 Prediction -> Michelle Obama in 2016 not Hillary because the Obama Personality Cult just re-elected a Depression President


Newt Gingrich upset many people, starting with Rush Limbaugh, when he predicted that Hillary Clinton would be the Democrat Nominee for President in 2016 and that the Republican Party as it now is would be incapable of dealing with that ticket.  He was half right and Rush was all wrong.  My apologies to both but let me explain.

Many people are wondering why the Obama Re-Election Campaign is still running ads.  Some are speculating that he will try to run for a Third Term, repeating the accomplishments of FDR and abolishing the 22nd Amendment to the Constitution. Why bother?

You have a Personality Cult and armies of followers occupying major cities in swing states.  They can override the rest of the country and re-elect a President who is taking us into another Great Depression.  This same cult, including the news media and entertainment media, has succeeded in creating a massive voting block of misinformed voters who blame every problem that exists on the Republican Party.

Why bother with a Third Term or an unpopular former First Lady when you have an extremely popular First Lady that would be supported by everyone who supports the President.  The Democrats are smart enough to see that they can have another 8 years and the First Female President with little effort.


·         Tax Cuts?  Nope.  The Fiscal Cliff Deal took that away from them.  Regardless of whether this is true or not, that is the story in the media and they are sticking with it.


·         Fiscal Responsibility?  These are the people who argue about Baseline Budgeting.  Every budget is scheduled to increase for inflation while Social Security is not and any budget cuts are only cuts to the increase of said budget, not actual budget cuts, except for Social Security.


·         Support the Military?  Sorry.  The Republicans created the Sequestration as part of the Fiscal Cliff and all the President has to do is put back some of the money being cut from the military budget to be known as a Pro-Military President.  Again, regardless of the truth, that will be the story in the media and they will stick with it.


·         Social Issues?  They run from those like vampires from garlic and they are STILL crucified for them by the news and entertainment media.  Any resemblance to truth or reality is scarce.