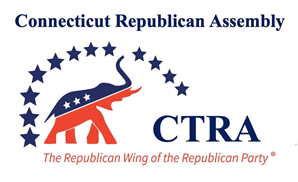 Note: Some time ago, Blogger changed their formatting and it sucks! It is almost impossible to edit, clearly.

On Saturday, March 27, over 75 members and friends of The Connecticut Republican Assembly (CTRA) gathered at Il Monticello Banquet Hall in Meriden for their 4th Annual Luncheon & Convention. The theme of the convention was “A Return to S.A.N.I.T.Y.” and it featured a roster of distinguished Republican speakers, each one addressing one tenet of the theme.

SECURE Your Freedoms…by Learning Your RIGHTS!

AMERICA is Great…Because America is GOOD!

INSPIRE Your Neighbors…by Being COURAGEOUS!

TEACH Our Children HOW to Think…Not WHAT to Think!

YOU are Responsible…for Your Own DESTINY!

The speakers were Martha Dean, Constitutional Attorney and candidate for CT Secretary of

during lunch. Fight Voter Fraud has assembled a ‘silent army’ of volunteer and professional investigators who follow leads and data to verify fraud where it rears its ugly head. The aim of their important work is to ensure ‘One vote for each legal voter.’ Interested citizens can contact them at https://fightvoterfraud.org/.

To feature the work of their increasing membership, CTRA recently created an award in honor of their founder and first CTRA president, Mark W. Anderson. They made Mark the first honoree, presenting the award to him at the luncheon. Mark is currently a member of the Connecticut House of Representatives, representing District 62. He assumed office on January 6, 2021.

If you are interested in supporting CTRA, you can apply for membership, sign up for email updates, attend future events, like/contact them on Facebook, MeWe, or Telegram. For information on all of these opportunities, visit the website at www.ctra.us.