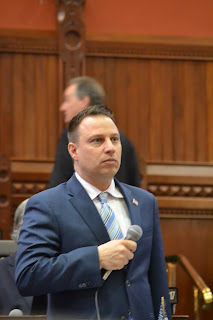 HARTFORD – State Representative Rob Sampson (R-Southington, Wolcott) offered an amendment to H.B. 5185, An Act Concerning Guardianship Appointments for Individuals Seeking Special Immigrant Juvenile Status, which would have repealed a provision in Connecticut state law that ignores federal supremacy on the issue of immigration and effectively makes CT a "sanctuary state."

“I believe this gives us an opportunity to address a glaring problem in our state law regarding the subject of immigration,” Rep. Sampson said. “My amendment would remove language from our current state law that is in direct violation of federal law, specifically known as the "Trust Act," ending the practice of blocking attempts to prosecute criminal illegal aliens who are wanted by federal authorities. Opponents of my amendment can spin all they want and attempt to conflate illegal and legal immigration, but this proposal only deals with how our state respects the federal government's authority when detaining wanted criminals.”
“By upholding the Trust Act, we are telling people in our community that we only care about some of our federal laws, while others can be ignored,” Rep. Sampson added. “Not addressing this problem is extremely unfair to people who enter this country legally and obey the law. This practice undermines our criminal justice system, makes our communities less safe, and perpetuates a culture of lawlessness that benefits no one.”

Sampson's Amendment B LCO 3479 failed on a nearly party line vote with every Democrat voting to uphold the Trust Act.
By Middletown Insider - April 19, 2018