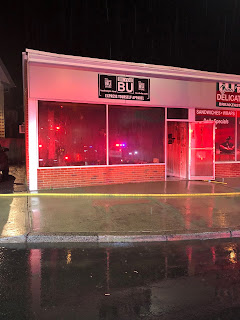 South Fire District firefighters responded to 173 East Main Street for a report of a structure fire Sunday night at 6:58. On arrival firefighters found heavy smoke coming from the left rear of the building. Firefighters forced the rear door open and found heavy fire.

They were able to contain the fire to the rear of the business with heavy smoke damage throughout that side of building. Firefighters conducted quick searches and found the building unoccupied at the time of the fire. There were no reported injuries.

Mutual aid came from Middletown and Westfield Fire Stations, with additional coverage from Durham and Haddam fire departments. The Fire is under investigation from the Fire Marshal’s office and State fire Marshal along with the Middletown Police Investigation Unit.
By Middletown Insider - April 16, 2018