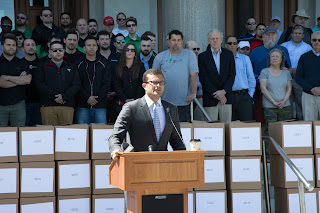 State Senator Art Linares (R-33) today called for changes to the state employee pension plan, including limiting the annual pension that can be earned to $100,000.

“For the last several years, Connecticut has attempted to weather the state’s financial storm by raising revenues and cutting services. Nothing we tried so far has stopped the year after year budget deficits that threaten the state present and future,” Sen. Linares said. “I think it’s time to address our unsustainable state employee pension system. It’s unbelievable that we have state retirees receiving pensions of more than $100,000. How was that allowed to happen?”

Linares referenced a story in the Hartford Courant reporting that nearly 1,400 state retirees receive a pension in excess of $100,000. This includes at least one pensioner receiving more than $300,000 year.

“State employees are good, hard working people, but the state simply cannot afford these extravagant pensions. I don’t think the pension plan can afford it either,” he said. “How are we going to explain to future retirees that the money for their retirement is gone because we allowed past retirees to earn pensions well over $100,000?”

Sen. Linares said that in the private sector, a pension of more than $100,000 is unheard of.

Sen. Linares said he plans to pursue legislative options in the coming session.