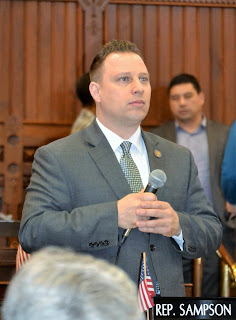 HARTFORD – State Representative Rob Sampson (R-80) who serves as the Ranking Republican member of the legislature’s Insurance & Real Estate committee made it clear he intends to oppose efforts by Democrats to restore a controversial part of Obamacare that was recently repealed nationwide.

“If this measure becomes law, it will not lower the cost or improve the quality or availability of healthcare and healthcare insurance,” said Rep. Sampson. “There are only two reasons why people choose not to have health insurance; either they cannot afford it, or they are making a conscious choice as free citizens to go without it.  Either way, the state should not be fining them for exercising their basic rights as consumers. The individual mandate, when in place, fined people for not purchasing health insurance. Sadly, many who could not afford insurance simply chose to pay the fine because it was the cheaper option, but this only added to their financial strain. The majority party is not helping anyone with this proposal, and I will do everything in my power to stop them from burdening our neediest residents. Consumers have a right to decide if health insurance is right for them.”


Late last year, Congress passed a tax bill that repealed the individual health insurance mandate put in place by the Obama Administration. This mandate required all individuals to purchase health insurance under the Affordable Care Act (Obamacare) or be subject to a substantial fine. Many individuals who did not have the means to purchase a plan through the exchange opted for the penalty. Many conservative legislators at all levels of government, including Rep. Sampson, fought vigorously to repeal the mandate arguing that individuals had a right to decide if health insurance was right for them.

Majority Democrats are now pushing to bring the individual mandate back to Connecticut following Governor Malloy’s call for one during his State-of-the-State address last week. The issue has been taken up in the Insurance and Real Estate Committee where Rep. Sampson has vowed to defeat the measure. During the meeting this morning, he called for a roll call vote to stop the bill from progressing, but was defeated on party lines after the Chair allowed the votes to be held open for six additional hours to allow Democrats not present at the meeting to be called in to cast their votes. If the bill passes, the next step will be a public hearing.

“I think Governor Malloy is attempting to divert the public’s attention from our growing budget deficit by pushing his progressive agenda,” added Rep. Sampson. “There is a time and place for these discussions, but right now, we are facing an unprecedented fiscal crisis that has sent our biggest employers fleeing for greener pastures. I would think most residents would be far more concerned about that rather than the political games of an outgoing governor with a poor track record for economic growth.”

The Connecticut General Assembly convened on February 7th, 2018 for a short three-month session that ends on May 9th. The short sessions, held during the even years, are intended to address fiscal issues stemming from the biennial state budget passed during the odd years.
By Middletown Insider - February 15, 2018