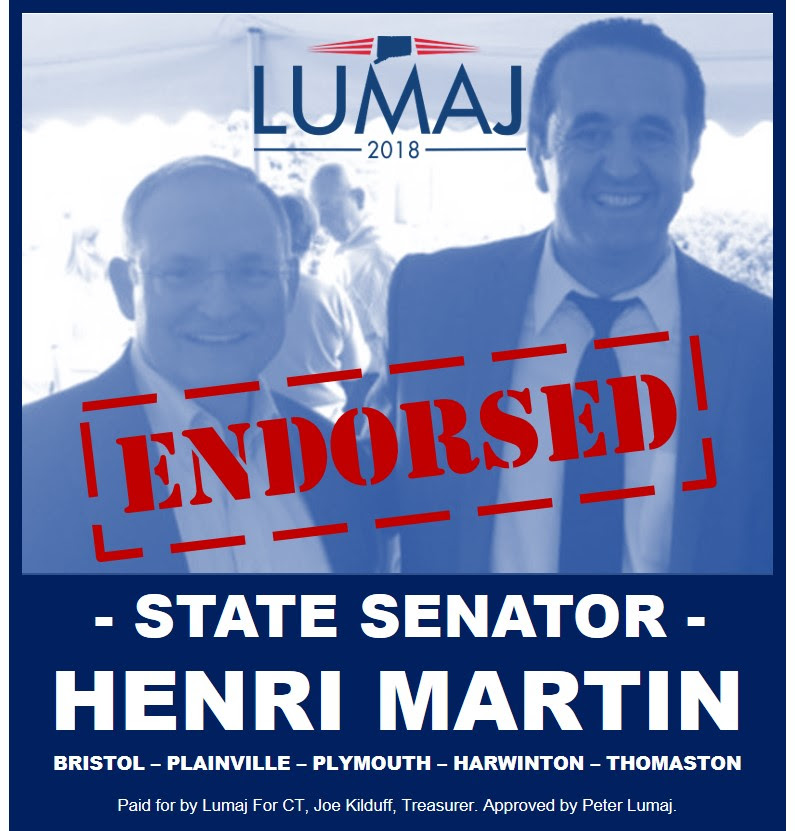 Bristol, CT, January 23, 2018 – Peter Lumaj, Conservative Republican for Governor, announced the endorsement of State Senator Henri Martin (R-31) this morning in his bid to become the 2018 Republican Party Nominee for Governor of Connecticut.

Martin joins a growing list of Republican leaders and conservative organizations throughout Connecticut supporting Lumaj’s campaign ahead of the 2018 Connecticut Republican Party Convention that will be held at Foxwoods in May.

Martin stated that he was proud to stand behind Lumaj, “Peter is a dedicated conservative who will fight everyday for the people of Connecticut. He has presented a solid and detailed roadmap for Connecticut that contains a bold vision for a sustainable future. Peter’s values are my values – we both believe in the dignity of hard work, the value of individual responsibility and the importance of extending a helping hand to those who are unable to help themselves.”

Martin continued, “Peter’s personal narrative is one that embodies the American Dream. Much like my parent’s own immigration story, Peter’s story is one of personal perseverance that led to promise and prosperity. The Republican Party would be wise to embrace candidates like Peter Lumaj because he is authentic and relatable. Those two qualities are paramount to winning elections in hardworking blue-collar districts like mine – Peter can win small towns like Plymouth and Harwinton, but he also has a unique ability to play well and win bigger cities like Bristol. I am confident that if we nominate Peter Lumaj, we will win in November of 2018.”

In response to Senator Martin’s endorsement, Lumaj stated, “I am proud and humbled to have the support of Senator Martin. Henri is a dear friend and one of the most courageous conservative leaders we have in Connecticut. He is a passionate and dedicated public servant and we welcome him with open arms to the team. I look forward to taking advice from Henri and working with him in the coming months as we work together to create a fresh start for Connecticut.”
Published by The Middletown Insider as a public service.
By Middletown Insider - February 04, 2018