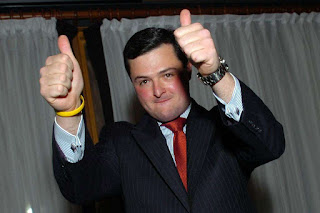 Wednesday night, I had the tremendous honor of introducing myself and my vision for saving our state.

I shared my record of proven reform and willingness to stand up to insiders in Hartford from both parties in order to do what is best for hardworking Connecticut families.

CT Post: Republican gubernatorial hopefuls trade wish listsTim Herbst, former Trumbull first selectman, said his first target would be to revamp the DMV and the second would be the Department of Transportation. He believes half a billion dollars can be saved by allowing non-profit social-service agencies to take over more.

“We need to attack the regulatory environment in our state,” Herbst said, vowing to appoint an inspector general if he is elected to root out waste throughout government. “We can transform government, make it smaller and smarter.”
CT News Junkie: Republican Gubernatorial Candidates Square Off In First DebateHerbst said people should be honest about eliminating the income tax, but that people have to be honest about what it’s going to take to get to that point.

He said Connecticut has to get its pension costs under control before it can talk about reducing the income tax, eliminating the estate tax, and reducing the corporation tax.
Hartford Courant: Republican Gubernatorial Hopefuls Offer Solutions To State's Fiscal WoesTim Herbst, who recently completed his fourth term as Trumbull first selectman, said he would seek to aggressively roll back regulations.

“The regulatory environment in this state hampers the ability to reduce spending,” he said. “So when we talk about reducing spending we have to reduce the regulatory environment in our state.”
Channel 3 Eyewitness News: GOP candidates for governor participate in first debateFormer Trumbull First Selectman Tim Herbst said regulation is the problem.

“The regulatory environment in this state hampers the ability to reduce spending,” Herbst said.
CT Mirror: Opening night for the GOP gubernatorial contender road showFormer Trumbull First Selectman Tim Herbst volunteered that if elected governor he would ask the General Assembly to reinstate capital punishment and end the release of inmates before completion of sentence, a position that would reverse decades of correction policies across the U.S.
All the best,