Videos of the fire and firemen at work, on second page.

At approx. 8 PM on the evening of March 4th, a Middletown man retrieved a steak from his gas grill, which was set up just inside the door of his garage.  A few minutes later, he looked out and saw flames coming from the grill . . .

When he retrieved his steak, there was a bit of a grease flare up.  After shutting off the gas, the flare up seemed to die down, and he returned to the house. 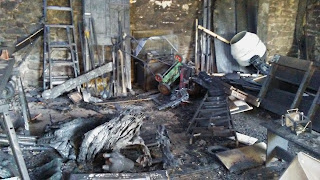 When he spotted the flames, he returned to the garage and retrieved a fire extinguisher, which malfunctioned.  At this point, the fire was still contained to the grill.  He went back to the house and got another extinguisher from the basement, and called out to his dinner companion in another part of the house to call the fire department.

The second extinguisher worked properly but was ineffective against the flames.  Remembering there was a fire extinguisher in his vehicle, he got it out, but it too malfunctioned. 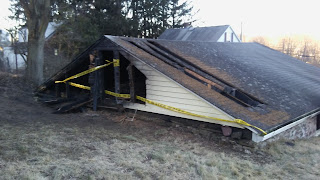 Having exhausted all measures at hand, he pulled his van out of the garage and on to the street.  His companion moved her car away from from the garage and close to the house.  At that point, there was nothing either of them could do, but wait for the fire department to arrive.

Firemen from the South Farms Fire District arrived in less than ten minutes and immediately began running a hose up the sloped driveway.  The home owner met the firemen at the street, thinking that fire extinguishers might still be enough to put the fire out.

It was less than a minute from the time he turned his back on the garage, until he turned around to see the fire was now out of control.  Evidently, during that short period, the fire had spread to two five gallon plastic gas cans nearby, melting them. 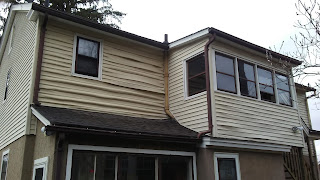 Exercising an abundance of caution, fire officials called for support from at other area departments; high northerly winds put neighboring properties at risk.  Later, the home owner said he counted at least a dozen vehicles parked up and down the street.

While not totally extinguished, SFD personnel had the fire well under control in about six minutes from the time they arrived.  In just a few more minutes, the fire was out.  In order to exhaust the heat and smoke, the garage roof and rear gable were cut open.  The building has stone walls on three sides, built into the hill and access to the loft in the rear at ground level, which significantly reduced the amount of loss.  Had this been a completely wooden structure, the damage would have been significantly more, and properties to the south, in greater danger.

According to the home owner, the South Farms Fire District firemen did an excellent job of fighting the fire.  It was extinguished in only about 10 minutes.  They were well coordinated and professional.  He is thankful for their service.

Stay tuned for the story of the home owner's experience with the contractor hired to effect repairs.
Videos of the fire and firemen at work.