Red Notes From a Blue State - The Malloy Court 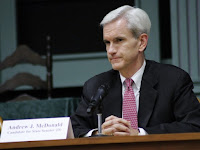 Chief Justice of Connecticut’s Supreme Court Chase Rogers is retiring after 11 years. There are murmurs at the State Capital that Associate Justice Andrew McDonald might fill the vacancy. When all vacancies are filled, Governor Dannel Malloy will have appointed 6 of 7 Justices to the Court.

McDonald, the youngest Justice on the court, was the lame-duck Governor's Chief Legal Counsel before he was appointed to  the Court by Malloy in 2013. McDonald had been with the Governor since Malloy’s salad days as Mayor of Stamford. Malloy’s Chief Counsels and political staff have been particularly favored during his administration. Luke Bronin, presently Mayor of Hartford, a city teetering on the brink of bankruptcy and in need of frequent cash transfusions from the state, also had served as Chief Counsel to Malloy.

In 2011, Malloy appointed Mike Lawlor as Undersecretary for Criminal Justice, a new position, and Lawlor has taken it upon himself to reform Connecticut’s criminal justice system. He instituted a “get out of jail early” program that for a time was releasing into Connecticut’s social bloodstream violent criminals such as rapists and arsonists. Lawlor now proudly boasts he is sending “non-violent” criminals to college.

As co-chairs of the General Assembly’s Judiciary committee, McDonald and Lawlor strove mightily to repeal Connecticut’s death penalty law, a difficult chore at the time because the repeal effort coincided with a multiple murder in Cheshire by two paroled prisoners, Steven Hayes and Joshua Komisarjevsky. The pair, who had murdered the wife and two daughters of present State Representative Dr. William Petit, were sentenced to death, and lingered for years on Connecticut’s Death Row, until the death penalty was found unconstitutional by Connecticut’s Supreme Court in 2015. By that time, McDonald was a sitting State Supreme Court Associate Justice.

The abolition effort had in it more twists and turns than a slinky.  In 2009, then Governor Jodi Rell vetoed a death penalty abolition bill, citing the horrific Cheshire murders as a principal reason. In 2012, the General Assembly voted to repeal the death penalty prospectively, leaving the penalty in place for 11 prisoners on death row. In 2015, the State Supreme Court declared capital punishment inconsistent with Connecticut’s Constitution, thus effectively commuting the death penalties pending against all death row prisoners to life in prison.

The Court pulled out of the usual sociological hat the relevant mumbo-jumbo to give heft to their decision. The death penalty, the justices found, “no longer comports with contemporary standards of decency and no longer serves any legitimate penological purpose.” The majority decision was written by Associate  Justice Richard Palmer, who was joined by three other justices. The Court arrived at this sunburst only three years after Connecticut’s backward General Assembly had exempted the 11 death row prisoners from the death penalty repeal law.

For years, courts have been in the habit of boldly going where electable legislators fear to tread. Judges are not subject to the whimsy of voters who might just believe that capital punishment, under limited circumstances – multiple murders such as occurred in Sandy Hook Elementary School, terrorist multiple murders, the murder of police officers or prison officials, murder committed by a prisoner who has been sentenced to life for a previous murder, etc. – is fully justified and might be useful as a deterrent to criminals contemplating comparable mayhem.

Anti-death penalty advocates argued unpersuasively that the death penalty was not a deterrent, prompting some disputatious rationalists to point out that if the death penalty was not a deterrent, neither were lesser penalties. Those supporting abolition of the death penalty on such flimsy grounds were really advocating for the abolition of all penal punishment. Why not open the prison doors and send the inmates to college, Lawlor’s solution to recidivism, close down the courts and read the last rights over a very expensive, moribund judicial apparatus? In fact, all punishments un-applied are non-deterrent. Connecticut’s death penalty, however just in some cases, died the death of a thousand cuts; it expired from relentless appeals and delays. The Supreme Court delivered its much appreciated death blow by resorting to sociological gibberish.

To read the rest of Don's commentary, visit his web site.
By Middletown Insider - November 09, 2017