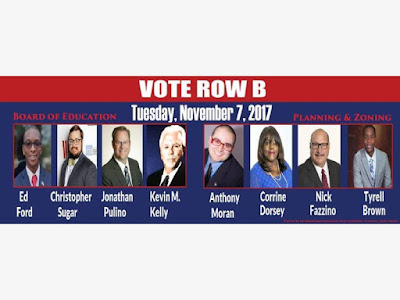 Did you know Election Day is fast approaching!  Do you know who the local Republican candidates are?  Well, in this article you will find out just who the candidates are from their bios.  Published as a Public Service.

Board of Education Candidates:

Edward C. Ford Jr. is a youth Minister of the Gospel of Jesus Christ. He obtained his Minister's license in November of 2015 but has been working with youth for many years in various environments. He has served and still serves the youth of his home church at Bread of Life in Waterbury, CT under his Father Pastor Edward C. Ford Sr. and his mother Reverend Sheryl Ford. He has been a mentor to 7th and 8th graders at Woodrow Wilson Middle School through the Middletown Youth Services Bureau. He has worked as a camp counselor for Park and Recreation, as well as the Middletown Arts Department. He graduated from Middletown High School with the Senior Class of 2015, whom he serves as the Vice President.

In the summer of 2015 Ed Ford worked for the City of Middletown as the Summer Intern for the Mayor's Office. He then attended Johnson and Wales University in Providence Rhode Island during his freshmen year of college where he was elected as a University Senator. There he stood for the safety of the students and for their educational benefits.

He now serves on the city's Affirmative Action Monitoring Committee and believes firmly in standing for racial equality in any way he can to help further opportunity for all people. He also serves on the board of Stir Up The Gift institute which is a non-profit organization within Connecticut founded by his sister Keshia Tigner. This organization promotes mentorship, leadership, the arts and many other profitable values. Whether at church, school, summer camps, or within different organizations Ed Ford has been a mentor and advocate for the youth in the community.

Mr. Ford aspires to obtain his Ph.D. in Psychology and do everything he can to help and serve people. Ed Ford desires to be on the Board of Education to help work toward accomplishing goals such as shrinking The Achievement Gap, working to encourage more youth involvement within the community and work with other board members to pass budgets that are efficient and fiscally responsible. He desires to bring forth a fresh and youthful perspective to the decisions that are made concerning the youth of the city and will stand for them to receive the best education possible.

Born and raised in Oswego, NY to a working class family. I worked my way through school at night while working during the day doing construction for my father.

I believe that local government is the most important facet of society since the decisions made at the local level will have a more profound impact on members of society. Local government should be a voice for the community; ensuring that all the needs are met but in a fiscally responsible manner.
I currently work for a mid-size law firm in Milford, Connecticut practicing in the labor and employment law department. I have been a community t member of the Middletown BOE policy committee since 2016.

Mr. Pulino has served one term on the Middletown Board of Assessment Appeals and currently sits on the town's Zoning Board of Appeals committee as well as Chairperson the Cable Advisory Board. Occupation: Currently teachers English Literature at Maloney High School in Meriden, Connecticut where besides teaching five daily classes, he has been elected building representative for the Meriden Board of teacher four years in a row.

Education- Mr. Pulino holds a Bachelor's of Science in Communication and Bachelors of Arts Degree from Eastern Connecticut State University (1994/1995). He also holds a Masters in Educational Technology from Central Connecticut State University (2007) as well as 30 credits past his Masters. His earlier education includes earning an Associate Degree from Middlesex Community College in 1992 and a member of Xavier High School's class of 1989.Political Offices Held: Chairperson of the Middlesex Cable Advisory Board (2009-Present); Zoning Board of Appeals (2009-Present), and Board or Assessment Appeals 2007-2009.

Civic Organizations: Italian American Civic Organization (2005-Present); Washington Lodge No. 70 Windsor, and American Federation of Teachers.Volunteer: Comcast Cable - Host of "The Edge": a political satire program that deals with local political issues since 1998 and co-host of "The Variety Hour" with Billy Wilson since 2007.

My family moved to Middletown when I was 2 years old. I attended a combination of public and Catholic schools, including three years at Xavier High School. I hold a Bachelor of Arts in Sociology from the University of Connecticut. While attending Western New England School of Law, I began working at Connecticut Valley Hospital as a Psychiatric Aide. This led to a change of career paths and I became a Registered Nurse. I worked over 30 years at Connecticut Valley Hosp and the Whiting Forensic Institute. I held a variety of positions at the hospital, including more than 18 years I was psychiatric nurse supervisor at Whiting. I also served as Director of Nursing and Assistant Director of Whiting as a temporary service assignment.

Anthony was educated in Middletown Public Schools and graduated from Middletown High School. He was an active member of the School's Future Farmers of America (FFA) Chapter earning the highest degree the State FFA Association can bestow on its members.
Moran is currently a Student at Middlesex Community College in Middletown, Connecticut for an Associate of Science Degree in Criminal Justice where Anthony would like to work on becoming an Animal Control Officer. Besides his degree, Anthony is a very active member of both college clubs and the college community as a whole and has even served as the Student Senate President for two semesters. Besides, his co-curricular activities, Anthony is a Member of the Middletown Republican Town Committee as well as being a Student Member of the International Association of Chiefs of Police (IACP) and the American Criminal Justice Association- Lambda Alpha Epsilon. Moran is also an Ordained Minister with the Universal Life Church based out of Seattle, Washington in addition to being a Justice of the Peace. Anthony was a candidate for State Representative in the 100th House District during the most recent, 2016 presidential election.

I was born, raised, educated, and lifelong resident of Middletown. I'm married to my wife Josephine, and have 3 children Jennifer, Joseph, and Marcus. We love Middletown and wish to see Middletown remain a good place to live and raise a family.

I'm a graduate of Vinal Tech where I studied automotive and now have applied it to my career as a business owner Of MDC Statewide Appraisal Service based out of Middletown.

Being a business owner I know what budgeting is all about and it is my opinion the City Of Middletown needs a lot attention in that area. At this time, spending and taxes are out of control.

The city needs to live within its means and if elected I will be my goal to work hard to lower spending and entice business to Middletown to grow the grand list and lower the tax burden on the citizens of Middletown. I am currently Vice Chairman and am serving my 4th year as commissioner of the planning and zoning commission during these 4 years I have gained the experience what is need to continue the growth of Middletown.

Prior to being elected to planning and zoning I also served on the inland wetland commission. I am a member of the Italian Society of Middletown, IACO, Elks, and Polish Falcons. I was also involved for many years with youth baseball programs a manager/coach and board member. I'm asking for your support and vote on November 5th,2013 and I pledge to make the correct decisions to help each and every citizen of Middletown , get spending under control, hold or lower taxes. Vote Row A for a better Middletown.

I am currently serving as an Alternate Commissioner on the Planning and Zoning Commission.

I love Middletown and its people and want to see Middletown continue to prosper in the future by supporting further development of the riverfront and attracting business to the city. Both endeavors would increase the Grand List, create jobs, lower property taxes, support hiring of additional teachers, provide for After School programs, as well as, additional programs for our seniors.

Therefore, over the years, I have made a conscious investment of time and energy to that end. I will bring experience to Planning & Zoning. In 1985, I was elected Commissioner of the Board of Tax Review, now the Board of Tax Appeal. In 1999, I was elected to the elected to Planning & Zoning as a commissioner. I have served on the Boards of Housing and Development and Inlands and Wetlands.

I also served on the committee for Strategic Planning and was a member of the Republican Town Committee. Currently, I serve on the Board of Ethics. I have worked at Pratt & Whitney over 38 years and am a member of the Machinist Union Local 700. I am a member of the Order of Eastern Star and a blessed member of Shiloh Missionary Baptist Church. I have been married to Hirley Dorsey for over 44 years, have three beautiful daughters, Tocsha, Monique and Chaleica, 12 grandchildren and 4 great grandchildren, which are my heart.

Tyrell Brown is a 20-year-old college student. Tyrell is currently in his junior year at Southern Connecticut State University in New Haven. He is hoping to earn his MBA along with a minor in Political Science.

Tyrell is a member of the Youth Services Advisory Board here in Middletown. In his spare time, Tyrell volunteers at the Eddy Shelter in Middletown, where he serves food to the homeless.

He has received many accolades throughout his high school and college career ranging from sports to academics. However, his most memorable accolade was being elected Class President of his Senior class, in 2015.

Tyrell decided to run for office because he wants to see the city become more business friendly. One of his main goals if elected, is to work for a more simplistic process in attracting businesses to the city.

Please consider Voting for Row B on November 7, 2017 from 6am-8pm in Middletown (find polling place by clicking here).

The Middletown Republican Party strongly encourages voters to vote Yes on Question One:

Note: Please click on the candidates who have hyperlinks to see their respective YouTube videos about who they are and what they stand for.
By Middletown Insider - November 05, 2017