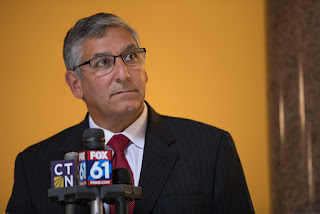 “Governor Malloy’s veto has now put Connecticut in chaos. By vetoing this budget, the governor’s draconian executive order will remain in effect and create destruction for low and middle income families. His executive order cuts core social services, slashes municipal aid, and zeros out funding for public education – a constitutional requirement. Beyond the obvious cuts, the governor’s actions will result in collateral damages that will create suffering that goes further than anything we’ve seen thus far. There are widespread implications of vetoing this budget and allowing the executive order to remain in effect that no one has a full understanding of yet. For example, the governor’s actions today threaten federal funding for programs such as women’s crisis centers. Lawmakers can correct this by overriding the governor’s veto. But first they are going to have to make a decision. Are they going to vote the party line? Or are they going to vote to protect their towns, cities, students and core services? What is their priority: politics or policy?”
By Middletown Insider - September 29, 2017