We're a Part Of Something Bigger Than All Of Us

We’re a Part of Something Bigger Than All of Us

We’ve always operated on one principle, above all else, and that is to report the truth. To date, we’ve done just that. We will continue to, yet, as in everything in life, we’re also evolving into bigger more impactful stories, some of which, are unchartered waters for all of us. First, you should know who we are, at The Middletown Insider; The major players, if you will. First, our Publisher, & Editor in Chief, Bill Boylan. Secondly, Investigative Journalist, & Editor, yours truly, Brian E. Clark, Staff Writer, Theresa Tillet, and our newest addition Photographer, Kaylin Clark.

I came aboard at the time I made my run for Mayor in 2015 (Remember that? Boy, was that fun!), and since then, I was just responsive to things that happened around town. Sure, it was informational, but it didn’t serve the greater good in my eyes. I have always had a deep burning desire in my heart to help people. In my earlier years, I followed my heart and became a Firefighter/ EMT, and the constant training that came with those jobs, but Pre-9/11, it surely wasn’t what it is today. Then 9/11 did happen, and that was what ultimately ended my career in the Fire Service.

I try my hardest, when I write, to bring the experiences I experience in the moment, to the paper on which I write. I want to tell, in the best way I can, what the truth of the story is; Good, or bad. If there are some bad pieces to the story, and there are victims, I may not always include every detail, because to do so would not be for the greater good, rather it would harm people. While I have been accused of leaving facts out of sensitive stories, usually by “Anonymous” commenters, consider me guilty as charged, because I will not harm someone for sensationalism. What about Politics you ask? What about countering one side rather than another? Politics is like boxing, you know you’re gonna be hit going into it.

In early August, Bill Boylan, and I sat in our Conference Room, otherwise known as Dunkin Donuts, and over a great cup of S’mores Coffee, we discussed possible stories to write. As you’d expect, I had a bunch of ideas in the holster, and we discussed each one. Some are in the works still, others didn’t make the cut. Nothing new there. Then, pausing, reflecting back on the work I’ve done with my Therapist over the last year, I sighed, then said it… “What if we go to New York on September 11th, cover the Remembrance Ceremony, and then, as we meet up with some members of FDNY I knew, I’ll tell my story; Of what I saw and did that day. Better yet, we’ll retrace my steps.” (This is because as a Young Firefighter, I did what so many others did that day, and responded to the biggest terrorist attack the U.S. has ever seen, blindly.)

Like many times in my life, I heard the words coming out of my mouth, but couldn’t believe I was suggesting it. Beyond that, The Middletown Insider has never attempted anything like this before. Also, there was the part that this was going to cost money. A lot of money, and we’re an all-volunteer staff, with a $0 annual budget. I had never seen Bill so excited! He was all about doing this, and his positive energy flowed into me, and I became excited about this. We understood that we needed money, and we’d settled on crowdfunding, but we also recognized that if there was ever a time that we were going to begin advertising, this was it. 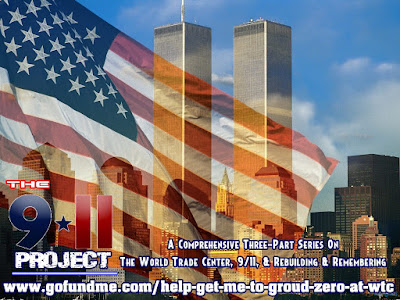 As many of you know, we’ve reached our goal, and we are indeed going to New York on September 11th. The story, aptly named, “The 9/11 Project”, will be a Three Part Series. The first part will be covering the Planning and Construction of the original World Trade Center Complex. The Second Part will cover September 11th and will include my story, along with the stories of Fire andPolice Men and Women that responded and survived the attack. The Third and Final Part will cover the Rebuilding of the One World Trade Center, along with 2 (Still under Construction, 3,4, and 7. This will also include the design and construction of the Memorial and Museum.

My story is one of the thousands of Emergency Service Workers that responded that day, and the days, months, and years to follow. Men and women from across the country, and around the world came to help. Not because they were ordered, but because the need was great. As divided of a Country, and World we can be, if help is needed, the façade falls away, of Democrat, or Republican, or U.S. Citizen, or Connecticut Resident; It all falls away, and we’re left with what God intended us to be. Humans helping humans. “Greater love hath no man than this, that a man lay down his life for his friends.” (John 15:13) It’s unfortunate that a disaster has to happen for us to show our love for each other, but we do show it, and it’s amazingly powerful.

We have reached our goal of $500 to take us to New York on September 11th, however, because we had not attempted anything like this before, I did not figure in the Fee’s that Go Fund Me charges, which on $500 is enough to bring us up a tad short. I have advertising space left on the First part, and for $50, I can guarantee a business card sized ad, with your business’s Logo or Ad. As of the time of this article, we’ve had 867,380 Views on our Site. We have better readership in Middletown than the Press or Courant.

I thank everyone that donated to our mission thus far; It certainly couldn’t have happened without all of you. I’d also like to acknowledge that didn’t donate but still support us nonetheless, by reading our stories and being a fantastic group of people. We know the economy is tough right now, and support comes in many forms. However, those that did donate, and the businesses that supported us, I say, welcome. You are part of something great, and big.


All we need is $50 more! Please go to www.gofundme.com/help-me-get-to-ground-zero-at-wtc or email me at clarkofmiddletown@live.com. We accept Credit and Debit Cards, and of course Cash & Checks. We’re so close! Will you be the one to be part of something great? Thank you, everyone, for reading.

This is all possible because these fine businesses and people believe in us...And we are deeply humbled.