When Tony Moreno, threw his Baby Son, Aaden off of the Arrigoni Bridge, I, like the rest of the City, like the rest of the Country, was shocked and horrified. It was truly a horrific crime, and one that I’d like to tell myself never should have happened. I’m speaking in more general terms of how a Man, with a Baby, was able to walk up the Bridge, mostly unnoticed, and not only throw his Son off but then jump himself. We would like to think as a society- A society that is large enough where you can’t go to an empty field without running into someone- that our Emergency Services would have something like that covered. I had thought that too, until I ended up back up there, 2 years later, covering another person that went over the side, in what were initially suspicious circumstances. 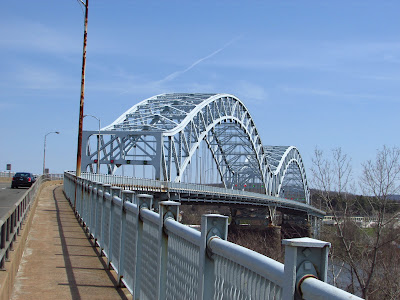 I wasn’t under the impression that other men & women hadn’t committed suicide in the 2 years following the Moreno incident. I have been walking up there for some time, and have seen the Police Tape that litters the railing after someone has jumped. May, 31st was an unusual day for me, because I had walked across the bridge late that day, only to see a disturbance up there a short time later. It was then I had learned a man, very well-known to the Community, and close to many of my friends, was the Arrigoni’s latest victim. His name was Steven Detoro. And I’m not interested in debating the why & how of Steven’s death, I’ll just say it was a tragedy to all who knew him. But it was this tragedy that spawned me, and many other City Government Leaders, to question why are we letting this happen to our community.

I had to start with, how often is someone dying by committing suicide, on the Arrigoni Bridge? Depending on which agency you want to rely on, that number could be 76 Incidents from 2008 to Present, or 88 Incidents from 2002 to Present. The first is from the Police Dept., the Second from the Fire Dept. To be honest, I’m not sure what to believe. The Police Dept. demonstrated that they had not kept reliable records, and the Fire Dept. is sketchy as well. I’m not here to pick on anyone for record keeping; The issue is people are dying as a result of that Bridge, and it has to stop. Now. When Baby Aaden was killed, the main argument was that the State-owned the bridge. Middletown has no jurisdiction regarding installing any Suicide Barriers. I don’t know what, if any action was taken in 2015, but the result was obvious.

I liken the Arrigoni Bridge to being No Man’s Land. Sure, there’s moving traffic up there, but there is no emergency personnel monitoring the walkways, and nothing to alert anyone if someone does go over the side. If by chance, someone wanted to commit suicide, all they’d really need to do is time their jump correctly, and no one would know until the body washed up downstream. The obvious place to start a campaign for any type of Suicide Barrier was obviously the State DOT. I’ll explain the course of events, but for your own benefit, please reference the photo’s I’ve included.

On June 12th, I was contacted by Kevin J. Nursick, Spokesman for the DOT, and in a very unconcerned manner, told me that there was a plan to, “rehabilitate the approach spans to the bridge in about 3 years or so.” Being I hadn’t asked anything about that, I read on, and was very concerned, as he told me, “The blunt reality, that I hesitate to say, but feel I need to, is that there are some 5000 bridges in the state.  Not one has a net.  Some have fences, and those fences are to prevent hoodlums from endangering motorists below (keeps them from dropping/throwing items onto cars).  Both fences and nets can be defeated by anyone intent on harming themselves.” The same man, Kevin J. Nursick, doubled down, three days later when he told a fellow journalist that the said, “Approach Span Rehabilitation Project” would cost $37 Million, and that included no plan to install Suicide Barriers, or Nets.

On the 7th of July, Mayor Dan Drew, penned a letter to DOT Commissioner James P. Redeker, after a couple paragraphs of ego-inflating, Drew really gets to the heart of the matter, referencing research that was done on Suicide by Bridge and suggests ideas to solve these issues in our community. Sans the ego-inflating part, I was impressed. I too had conducted extensive research on the topic, and he was right in line with what I had found, and mentioned in past articles. I liked it but wasn’t very hopeful. On August 4th, the Commissioner replied with a very long letter that can be summed up in 4 words: We’ll talk about it.
We have people dying now! In the time it takes me to write this sentence, and the time it took you to read it, someone could have jumped from the Arrigoni Bridge, and it’s very possible, it could have gone unnoticed. These are people from our community. People we know. Our family. Our loved ones. Our friends. Mental Health is the only area in medicine, where there are no diagnostic tools, other than for someone to talk about what’s bothering them. When that falls through, there is nothing left for anyone to know something is wrong. When these things aren’t addressed, and an opportunity presents itself, as it does with the Arrigoni Bridge, we have a problem where on a bad day, someone dies.

The obvious solution would be to install Suicide Prevention Measures (There are more than just Fences, and Nets.) The solutions being talked about, are for 2 years from now, and to be honest, I’m not too sure that it will ever come to fruition. I’m not doubting Mayor Drew’s sincerity in wanting this for our community, but if we just look at the last couple weeks, you’ll come to the same conclusion: The State of Connecticut is broke. They don’t have money for our children’s education! I can’t believe in 2 years they’ll find a magic pot of gold just for Suicide Prevention Measures on one bridge, not to mention the other 5000 that will need work too.

I won’t complain without offering a solution. As I had said, I have done my research too. Fencing and nets are expensive, and while I like the idea of fencing, the feasible answer would be CCTV Cameras, with Motion Sensors near the Rail- so, if someone goes near or over the rail, an alarm would sound, alerting Emergency Dispatchers. Secondly, a more comprehensive Emergency Response Plan. The one we have now relies on South District Fire Department, the Police and Fire Dept. manning boats, that may or may not be in the water already, and Fire Departments from Mutual Aid Towns, that are all largely, volunteer, and are themselves, reliant on our City Fire Dept. for river- rescue activities. It will all cost a lot of money. Money, however, that is readily made available in the form of Grants, and in some cases, Loans (Very Low Interest, or No Interest) that we can obtain from the Federal Government. This allows us to solve our problem of suicides from the bridge, on a timeline we can manage, without relying on a State we can’t be sure would have the money made available, on the timeline they propose.
I’d like to close with this thought: I’m not trying to sensationalize the suicides that have happened on the Arrigoni Bridge. Rather, I’m calling attention to a serious problem we have here in our Community, for the purposes of solving that problem. I am in complete agreement with Mayor Drew; He said what needed to be said, but the devil is in the details. If he doesn’t stay with this issue, our attention will be turned away again, only to be turned back when it happens again. It’s my sincere hope that the City of Middletown and the Town of Portland find an amicable solution to this deadly problem.