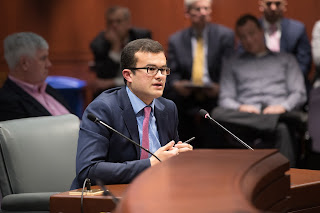 State Senator Art Linares (R-30) today expressed disappointment that the legislature voted to approve
a package that locks the state into a ten-year deal with state employee unions. Lt. Governor Nancy Wyman cast the tie-breaking vote in the Senate.

“This deal fixes one-third of the state’s cost going forward,” Sen. Linares said. “It commits the state to paying wage increases and benefits, and prevents the state from taking cost-saving steps like consolidation and privatization no matter what happens to the economy. Ninety percent of American workers don’t have the kind of guarantees contained in this package. What are we doing?”

Sen. Linares said the Connecticut economy is struggling and facing years of projected budget deficits. By approving the agreement, the legislature is virtually guaranteeing tax increases and cuts to the social safety net.

Sen. Linares said legislators should be taking matters into their own hands. Rhode Island provides an example of how Connecticut could reform government and pension plans.

“In Rhode Island, they have the future under control and our legislature should be doing the same thing,” he said. “We need to reduce government costs. We should be encouraging innovation and ways for government to work smarter and less expensively. This agreement just continues more of the same.”

Sen. Linares said Senate Republicans presented a budget proposal that achieved far greater savings than the union agreement. It also reduced costs and did not include new taxes. However, it was never called for a vote.

Now that the union contract has become law, Sen. Linares said the state is going to need nothing shy of a miracle to turn the economy around.