Opinion by Rob Sampson - “The Results of Doing Nothing” 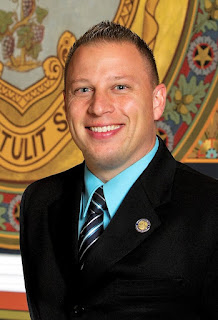 Last month, I shared the inside story on what’s happening, or rather, not happening, regarding the state budget debate. Since then, little has happened to bring us closer to voting on the budget itself, despite the passage of a new state employee union agreement.

On July 24, the SEBAC agreement gained House approval on a near party line vote, 78-72 with one lone Democratic representative voting against the deal and with the GOP. A week later, the State Senate followed suit as Lt. Gov. Wyman casted the tiebreaking vote, making it 19-18 in favor and sealing Connecticut’s fate until 2027. The agreement takes effect immediately.

There are few impending votes where I have heard from as many of my constituents as I did on this one. Aside from a small number who contacted me in favor of the deal with the added directive to find revenue in the form of more taxes, most everyone beseeched me to vote no.

I opposed the deal personally and was disappointed by its passage since I was hopeful that one of the more moderate Democrats in the Senate would break ranks and vote against it. The main concern expressed by my constituents is the one I shared, which is that the agreement extends the union contracts through 2027, even though many agreements were already expired or set to expire in 2022.

It is bad policy to make agreements so far into the future, when even the present is uncertain, not to mention locking out the next five future legislatures, and one or two Governors, out of the ability to make what are likely to become necessary changes. Regardless of the terms of the deal, I see such an overreach of authority as the height of arrogance and an invitation for corruption.

Further, a main provision in the agreement calls for a four-year, no layoff period, meaning that the state will be limited in its ability to realize labor savings if needed. No one wants to see anybody lose their job in challenging economic times, but it is unfair for public employees to be immune to layoffs when their private sector counterparts are not guaranteed the same protection.

There is also some question as to whether the claimed $1.5 billion in savings would ever be realized and if it’s even enough considering the deficit is now above $5 billion. Connecticut voters should remember well those members of the legislature who voted to push this deal through. Without the ability for future state leaders to make changes to state employee agreements, damaging cuts will inescapably fall on social services, aid to towns and education.  The result will be a reduction in services and inevitably more taxes.

Despite this move by Gov. Malloy and the Democrats, with their ever-shrinking majority, they remain unprepared to put their budget, or any budget, to a vote!

Republicans in the House and Senate have been ready to debate and vote on our plans to balance the state budget, with no new or increased taxes, and provide full funding for towns, including education aid, since May. My Republican colleagues and I in the House made two attempts to begin the budget debate the day we were brought in to vote on the union deal. Shamefully, we were denied on two separate party line votes.

Despite controlling the agenda and having the majority, the Democrats cannot seem to get their members to agree on what a state budget should look like – and just how much they plan to raise taxes. Rather than face the embarrassment of adopting a Republican plan, they continue to do nothing.

Unfortunately, the result of doing nothing is that Governor Malloy is left to personally call the shots. Most startling is his plan regarding municipal aid. He continues to threaten massive reductions in aid to smaller, rural and suburban, typically well-managed towns in favor of increasing aid to Connecticut’s often bankrupt large cities. This would mean a combination of huge cuts to local and education budgets, resulting in layoffs of town workers and teachers, and the potential for massive hikes in local property taxes.

Obviously, such a turn of events would be disastrous for our state and for our community. For me and many of my colleagues, it is tremendously frustrating since we have done our job by producing a budget that puts us on a new and better path to a prosperous Connecticut. We have also been prepared every day since the session began in January to debate and vote on any budget at all! The failure of Democrat leaders in the House and Senate to even allow a debate to begin is something that should never happen. I remain committed to solving the state’s budget crisis and working on behalf of my constituents.
As always, if you would like to communicate with me directly, don’t hesitate to reach out to me by phone or email. You can find me at www.repsampson.com and on Facebook.