MIDDLETOWN - Sen. Len Suzio on July 26 visited MARC at 124 Washington Street to join with area residents in calling for an end to the state budget stalemate.  (On the web:  www.marcct.org.)

Suzio noted that the failure of state lawmakers to pass a budget is negatively impacting non-profit providers and their clients by forcing the closure of day programs. 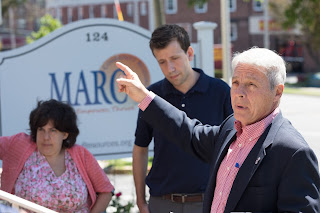 Suzio is calling upon the Connecticut Speaker of the House and the President Pro Tempore of the
State Senate to sign an emergency certification for the Legislature to pass a state budget as soon as possible.

Suzio’s petition urging state lawmakers to pass a budget is posted at www.SenatorSuzio.com.

"Vital services for thousands of our neediest citizens throughout Connecticut are being suspended and slashed due to the failure of the legislature to pass a budget," Suzio said. "Local budgets are also in limbo.  Our message is simple: We want legislative leaders to do their jobs and pass a Connecticut budget."

The line-by-line Senate Republican plan, which has been vetted by non-partisan analysts and is ready to be voted upon, can be read at www.NewDirectionCT.com.

*Suzio (Len.Suzio@cga.ct.gov) represents the 13th Senate District communities of Cheshire, Meriden, Middlefield, Middletown and Rockfall.  He can be reached at 800-842-1421.
By Middletown Insider - July 29, 2017