Because Each Person Makes Middletown, Home.

Before we start, we have to keep this conversation limited to one statement and one question: For one, change begins locally. Second, what can we do to save lives here? Now?

I don’t want to discount that we desperately need more mental health and addiction services, not just here, but all across the country. There is also the separate issue of an unimaginable amount of enlisted servicemen & women, and veterans that go without mental health or addiction treatment, but these are not issues we can solve locally, in Middletown. I’d love to solve the world’s problems, but let’s be honest, I don’t always play well with others.

The issue of preventing suicides on the Arrigoni Bridge is an issue that really should have been resolved long ago. But this is not an assignment of blame, and it’s certainly not a political issue. People have been dying for years; every year since 1938. But I can’t even say that with confidence that that statement is the truth. Turns out, we’ve only been tracking suicides and attempted suicides on the Arrigoni Bridge since 2008. Since 2008, in a certified copy of “Arrigoni Bridge Activity”, the Middletown Police report 76 incidences of suicides, or threats of suicides. There were also a few disturbing reports of “Kids hanging off…” 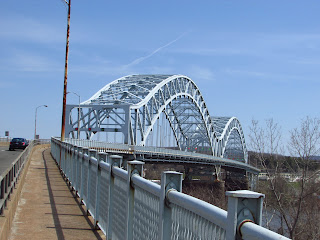 For whatever reason, the Arrigoni Bridge was forgotten by state and city leaders after baby Aaden Moreno was thrown off of the Bridge by his father, Tony Moreno. Moreno then jumped off of the bridge in an attempt to end his own life. It is quite a coincidence that Steven Detoro took his life on the day when Moreno was sentenced to 70 years in prison. We can’t go back, though. What has happened has happened, and we need to no make the proper decisions to help save the lives of our citizens, in our communities.

I walk down Main Street often. The whole length. From St. John’s to the South Green. Today, as I was walking I realized that I may not like everything that happens in this City, and I may not agree with everyone who lives here, but it’s the people of this city that make this city the place I’m proud to call my home. And I certainly don’t want to see one single person from our community injured or harmed, at their own hands, or someone elses because every single person here makes Middletown the city I love. So, where do we go from here? Preventive Barriers are the obvious choice for the Arrigoni Bridge, but we have to keep in mind the State of Connecticut owns the Bridge. So it was there where I started investigating what this will actually take to make it real. 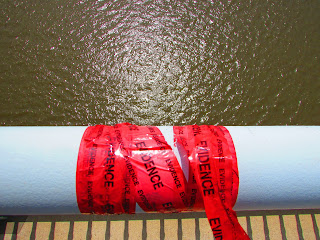 Kevin J. Nursick from the Connecticut DOT responded to my query of; “in the wake of the numerous lives the bridge has claimed, is the State planning on installing any preventive measures?” He cheerfully responded that “The DOT has a project to rehabilitate the approach spans to the bridge in about 3 years or so.” Notice how he left out the actual bridge; Just the “approach spans” were going to be rehabilitated. He didn’t stop there, and he really should have, because in the next paragraph he just pissed me off- “The blunt reality is there are 5000 bridges in the state. Not one has a net. Some have fences, but are to prevent hoodlums from endangering motorists…” Seriously? There wasn’t a productive word in his whole response! So, with this, I had to kick it up to a level that has the power to do something, which in my circle, is Councilwoman Deborah Kleckowski.

Together, we’ve pushed forward, conducting research on how other communities with tall structures handle suicide attempts, and what measures were taken, and frankly, what seems to work. Also, it may sound Tea- Party-ish, but the State of Connecticut be damned, don’t we have the right to protect our citizens? I learned about preventive measures, sure, but when I look into an issue, I want to understand as many angles as possible. In this instance, I wanted to know why people pick the Arrigoni Bridge (around here), and Bridges in general? And what happens to someone when they jump from a bridge? More specifically, what happens to folks here, jumping off of the Arrigoni Bridge? 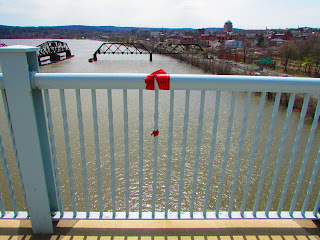 In my last article, I told everyone that I am one of the many who have attempted suicide, and it’s strange, even to me, how “suicide” has its own breed of sub-cultures. I don’t want to group my sources together, but there is so much data, and it all says practically the same thing. I hate to put it this way, but if you are dead set on suicide, you use a gun, or you jump off a tall structure. In Middletown, at 100 feet from the water, or 75 feet from Route 9, we have the Arrigoni Bridge. By all accounts, a jump from a tall structure, into water, or otherwise, has a sense of finality for those who do it. Locally, it’s broken down to the Arrigoni simply because it’s available. I don’t want to offer an instruction manual on how-to, but it’s thought that a fall from 100 feet into water, or if it were into earth, both are equally as fatal.

I was schooled in “Suicide by Bridge Jumping” from an Ex- San Francisco Chronicle Writer, John Koopman, who in 2005 wrote a very chilling article on suicide from the Golden Gate Bridge, which seems so much grander on a scale of Bridges, but the results are easily transferable. The Golden Gate is 250 Feet from the water, and the depth of the water is so much deeper. I hate to use the term, but it was discussed among us that it could be entirely possible for a person to survive a fall from those heights (250, 100 feet) if you “stuck the landing” correctly by entering the water feet first, or at a slight angle, which works great when you have water that is 300 feet deep, like San Francisco Bay, but where the water is like the Connecticut River, under the Arrigoni Bridge, the water is 8 feet deep, and an adult human travels 100 feet in about 2 seconds and hits the water at nearly 75-80 MPH. With 8 feet of water and a silty, muddy bottom even if you did “stick the landing”, you have an extreme probability of hitting bottom, and getting stuck in the mud, with broken legs, where you’ll drown. That is if you weren’t killed by the impact of the water or knocked unconscious and drowned. Death by Bridge Jumping is not a pretty way to go out. I’ll leave alone what happens if you aren’t recovered.

So, that was an extremely long road to ask: Why are we allowing our citizens to take their lives jumping off the Arrigoni Bridge? Well, anyone could simply counter that with; why should we intervene in anyone’s life or, how they live it, or choose not to? Very simply put, we don’t have that authority, but what does happen when someone chooses to jump from the Arrigoni Bridge; our Police, Fire, EMS, and Coast Guard, all have to risk their lives to either save the person that jumped, or recover their body.

Aside from risking their lives, it comes down to a matter of resources, and resources cost money. It becomes a balance of risking multiple lives of rescuers, and the “resources” that go along with training, equipping, and paying them, along with providing the equipment they use in the rescue, and then there’s the “hole” that is formed when they are being used to rescue, or recover a jumper that other departments and agencies have to fill, against putting preventive barriers, or nets in place, along with camera’s, or to figure out a quicker response plan in the event of a jumper.


The bottom line is literally this: If the State of Connecticut isn’t prepared to properly protect our citizens, are we willing to step in as a City, or in a partnership with Portland?
By Middletown Insider - June 13, 2017