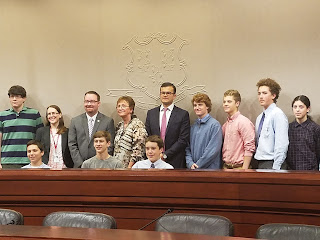 Rep. Siegrist said that, as a freshman legislator, he appreciates the opportunity to meet with young people from the district to talk about the legislative process and issues facing Connecticut.

“These young students had some really good questions about the future of our state,” he said. “We also had an excellent conversation about life, and how you aren’t going to win all the time, but how important it is not to give up. I shared a personal story with the students depicting a challenge that I overcame to highlight the importance of always trying to do one's best and never give up. These bright young students are very inspiring.”

When asked how he would solve the state’s budget problem, Rep. Siegrist said he has learned that one of the most important things he can do is listen to the people he represents and then bring their concerns, ideas, and needs to the attention of his fellow lawmakers. He said he must be an advocate for his constituents in Hartford.

Sen. Linares said that when talking to young people, he likes to tell them how young people can make a difference in their communities and the state. Having been first elected to the State Senate when he was 24, he said he wants people to know they are never too young to effect change.

“I’m really competitive,” he said. “Whenever someone tells me I can’t do something, it makes me want to prove them wrong. I try that much harder. When I hear people say we can’t do something because it’s always been done a different way, I want to change it.”

After questioning the legislators and Judge Quinn, the students, their teachers, and the jurist toured the capitol to learn various historical facts about the building and state.