The following is adapted from Wayne's own words.

This is Wayne's story; a story of how exposure to environmental toxins, deliberate indifference and negligence changed his life.  Wayne is incarcerated at Osborn Correctional Institution in Somers, Connecticut.  He, like all prisoners, is assigned a number.  His number is 27751.

To whom it may concern,

Hello, my name is Wayne and I am an inmate currently incarcerated at Osborn Correctional Institution.  (O.C.I.)  I have been here for 4 years and 10 months.  Now, when I arrived, I was a healthy young man; I was very athletic and strived to improve my life, so when I came home I could be a productive citizen.  Now, I'm not so healthy . . . and I might never go home.

After being here at O.C.I. for 3 to 4 months, I started to get spots on my forearm that looked like ringworm, so I wrote to Medical and was told to buy some anti-fungal cream.  (I didn't.)  Months go by and I continued to write Medical because my skin was getting worst.

Finally, APRN Rodriquez responded to my requests and called me into her office.  When I showed her the spots on my skin, she got very concerned and called in the facility doctor, Dr. Wright.  He looked at the spots and said, "Oh he just has psoriasis".  APRN Rodriquez asked the doctor, " Shouldn't we put in a request for him to be seen at Uconn Medical Center?"  Dr Wright said, " No, just start prescription medication for him".  Rodriquez did as requested.

This Misdiagnoses and Neglect went on for a year and ten months.  I asked another facility doctor, Dr. Freston, if I could get a biopsy.  Dr. Freston replied, '' From where I'm sitting, I can see that you have psoriasis.  There's no need for a biopsy".  The head of D.O.C. Medical, UConn's Jonny Wu, agreed.

Even when the facilities doctors had a clarification of my diagnosis and learned how to give the proper treatment, treatment was denied.  They denied me on multiple occasions; even after they reviewed the medical reports and saw the photographs of the open sores covering my body.

After being incarcerated about two years, I had over three hundred open wounds from my shoulders, down my front and back; on my arms and legs, hands and feet.  All the medications prescribed me had failed.

At this point, they finally approved a biopsy.  I had many biopsies.  And guess what.... the results came back; I had Drug Induced, or Cutaneous, T-Cell Lymphoma (skin cancer).

With further testing, they found Hypo-densities within the liver.  They found 1.1cm Hypo-dense lesions, several iliac lymph nodes, multiple enlarged inguinal lymph nodes, that they choose not to surgically remove.

My condition has progressed to where sores cover over 95% of my body.  I'm in constant, excruciating pain and when my skin went from spots to worse, I was housed in a part of the facility at O.C.I. that was previously condemned by the Government;  The Q's housing unit.

OSHA has stated, that; because of the black mold that's growing in the walls and the PCBs that cannot be removed, the building must be destroyed, to fix the problem.

Another issue is the water in O.C.I.  Why are there signs telling visitors not to drink the water?  Why are Correction Officers advised to bring their own water?  (Yet, prisoners are forced to use tap water or go without.) 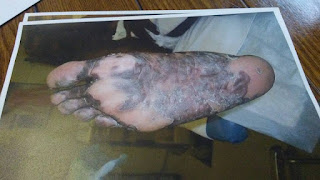 Well, it's because the water at O.C.I. has lead, arsenic, bacteria, and fecal matter in it, and these contaminants are very harmful after a long period of exposure, which is another part of why I'm in this condition, now.  I'm in this condition because I was housed in the Q's housing unit under unsafe conditions; conditions that the Commissioner knew about and because my medical condition was negligently ignored, for years.

Being exposed to high levels of PCBs, (which causes all types of cancers/lymphomas), increases one's risk of non- Hodgkin's lymphoma.  I now have non-Hodgkin's lymphoma.  Exposure to PCBs also kills your T Cells; it breaks down your immune system.  For decades they knew about these conditions, and still; for decades they housed inmates under these deplorable and harmful conditions.

(And why is the water at O.C.I. being tested and monitored by a non-certified Department of Health Operator, Mr. Kevin D. Roy?) 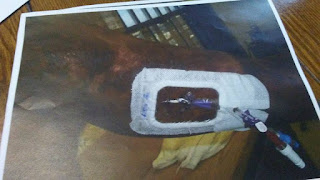 So yes I do fault the Department of Correction for my diagnosis of non-Hodgkin's Cutaneous T-Cell Lymphoma.  The D.O.C. felt they were above the law and did nothing about the conditions of confinement that are harmful to my health and now my future.

Because there's no cure for my disease, these people took my life away from me and I feel that the state of Connecticut is liable for all the wrong that's been done and it's crazy to know that some of these people treat their pets better than us inmates. All I ask is to be treated like a human being; the same as anybody would want for their loved ones.